Mountain ‘bog’ is here for keeps

The bog on top of the mountain may be with us forever.

The dog off-leash area sitting on the reservoir on the south-west edge of Owairaka has soggy areas that locals hoped might be solved by major repair work in 2015. But the problem remains – and it’s not going away.

The two worst areas were fenced off through the winter and hardly added to the aesthetic appeal of a “park” with terrific views from the Waitakeres to east Auckland.

This week, soil was spread over the boggy patches and the makeshift plastic fences were removed after inquiries to Watercare from Mt Albert Inc. 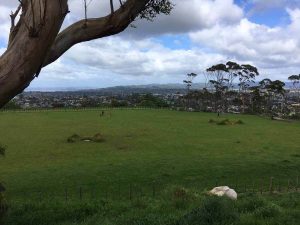 At the heart of the trouble is the reservoir built around 50 years ago and holding  35,000 cubic metres of water. It’s one of the city’s biggest reservoirs, supplying Mt Albert and Pt Chevalier, and major work was completed just two years ago.

But the high cost (up to $500,000) of installing additional drainage around the reservoir means Watercare has no plans to introduce a permanent solution to the soggy problem.

Sharon Danks, the agency’s transmission manager, says the high cost of putting in drainage isn’t the only reason preventing Watercare from dealing with the problem.

Watercare carried out repairs to replace the protective membrane to safeguard the integrity of the drinking water supply, she says. Then the area on top of the reservoir was resown. But the company is battling “poor design from 50 years ago and there are cultural implications from carrying out wholesale new drainage work”.

[The Tūpuna Maunga Authority is in charge of caring for the maunga; Watercare is responsible for the area the reservoir occupies.]

That means the same boggy areas will emerge again next year when the late autumn and winter rain starts falling.