Why has the owner of the burnt-out ruins waited so long before demolishing the building? How fair is that on neighbours and what does it say about our suburb? Picture: Bruce Morris

Twenty eight months after fire raged through the old Four Kauri Medical Centre in New North Rd, the graffiti-stained ruins stand as a monument to the apparent indifference of a developer.

The derelict building with boarded-up windows sits on a 1029sq m lump of land that looks more jungle than suburban section.

While the rats no doubt flourish in the knee-deep grass and ruins, two-legged animals have made their own impression. Since the fire on May 28, 2015, young people have turned it into a weekend haunt and  police have been called to deal with street people seeking shelter and a drinking den. Vandals have added their touch to the burnt-out shell.

The hovel sits barely 50m from the intersection of St Lukes Rd and New North Rd – the gateway to Mt Albert.

How could such an eyesore be allowed to remain so long in such a prime position?

Auckland Council visited the property after questions raised by Mt Albert Inc and reported “the building is not in a condition that would warrant council taking action in relation to demolition”.

Which begs the further question: if this building isn’t so bad that it needs to be demolished, what would it take to reach that status? 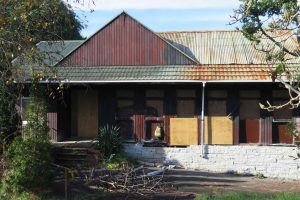 Albert Eden Local Board deputy chair Glenda Fryer told Mt Albert Inc: “Developers who leave a property in a derelict state of repair are just plain irresponsible, especially at a time when many Aucklanders are in desperate need of new houses and this site is a very good one with excellent public transport, and near good parks and community facilities.

“While council can’t compel a property owner to redevelop their property, a disservice is being done to our community by this particular owner.”

Local people can understand why a developer might want to sit on the land for a couple of years, but consider there was a responsibility to the community soon after the sale to get the property in decent order. Demolishing the building and maintaining the grounds was the least that should have been expected, they feel.

As well, there is a strong sense the council could have done more. After their visit to 728 New North Rd following our questions, the property owners were required to better secure the building to prevent public access.

But that was it, with the council now apparently talking to the owners about pre-development processes, including resource consent and, finally, demolition.

Wayne Pearson (pictured), co-chair of the Mt Albert Residents’ Association (MARA), says the site in its present state doesn’t “give the impression that we want people to have” as they pass through one of the gateways to Mt Albert.

He says MARA is “committed to enhancing our village and would like to see buildings such as this bought up to the same standards, or at the very least demolished.”

The same address is shared with Kool Services Limited, a linked company registered in May 1995, and calls to the directors have not been returned. They have also yet to show their hand to council planners, though there has been some talk of a new boarding house – perhaps not quite the sort of urban development locals would welcome.

Under the Unitary Plan, the block is zoned “Residential – Terrace Housing and Apartment Buildings Zone” – allowing “urban residential living in the form of terrace housing and apartments of between five and seven storeys”, according to the council website.

Whatever happens to the site, local people will want to see the retention of the kauri trees that gave the old medical centre its name. Because the trees are well to the front of the land, there seems no reason they would need to be toppled, but they have no special protection.