Jaimee McLaughlan and Denzel Robertson thanked the school – and their parents – for preparing them for the next stage of their lives. Picture courtesy Mags

When Denzel Robertson started Mt Albert Grammar School he was “a short, skinny, brown kid who had the same Sonny Bill haircut as every other Polynesian boy”.

This week, rather better developed as head boy, he devoted part of his farewell speech to remember those first few days at Mags in a class full of strangers who soon became his brothers.

Denzel looked to the pupils of the past and himself and fellow school-leavers of the future when he told the assembly: “Whether you’re in the library studying by yourself or even just at the bar drinking by yourself, you will always have a friend when there’s an Albertian around. Being a part of the MAGS community is both an honour and a privilege as we are a family, and families look after each other.”

He thanked teachers for their role in his development and had some special words for his parents: “You taught me to always aim high and to give it my best. To always push myself, as you believed that there is always room for improvement, and to surround myself with great people who I aspire to be like.”

Head girl Jaimee McLaughlan said in her speech she had loved every minute at the school – “It has given me great pride to say I am a student at Mt Albert Grammar and I look forward to being able to say I am an Albertian”. 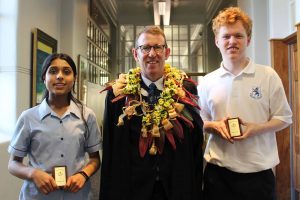 Jaimee thanked headmaster Patrick Drumm for “believing in me, trusting me to lead this school and for all the early morning coffees”.

She also paid tribute to teachers and fellow prefects… and her parents “for your infinite support and love”.

The speeches were made at the senior prize-giving, where Lucas Peterson and Harshita Nayyar were named as school dux. They are pictured here with Patrick Drumm.