Cheers to our own Arthur Daley

Arthur Daley (played by George Cole) starred in Minder and Ray Mills, with a lifetime in the business of wheeling and dealing, was just as sharp and funny

Ray Mills. You might have seen him down at St Luke’s mall, nattering to anyone with an ear. Or perhaps behind the wheel scooting around Western Springs, Mt Albert, Pt Chev, Morningside or Waterview, invariably in a flash car.

Really, you couldn’t miss him – the patch over the left eye that marked him out was a symbol of his spirit and gave a cavalier, piratical edge to his cheek.

The old rascal was on the front page of every newspaper in the country a few years back. This month, aged 85, he was in the Herald again, but this time in the death notice spot he nearly filled in April, 1994. 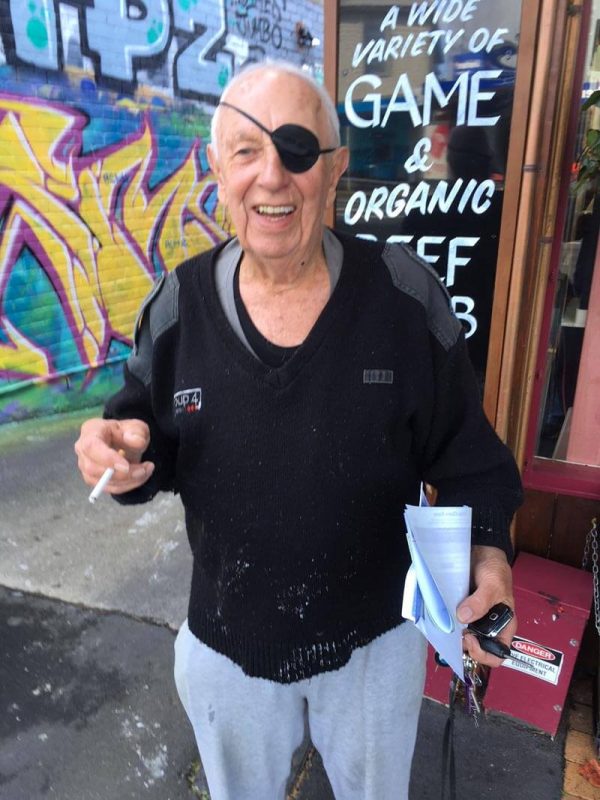 Ray Mills, a law-abiding and respectable Auckland equivalent of Cockney scoundrel Arthur Daley from British television’s Minder, should have died that month.

Somehow he survived a brutal beating, minus an eye, to continue life as one of the city’s great street characters, a wheeler-dealer famous on his patch for getting a bargain – and then giving one back (with a buck or two on top, of course) to the hordes who sifted through his stores.

Ray never spurned an opportunity to turn a dollar and for years was the “go to” man for insurance companies looking to quit fire or water-damaged products.

In the decades before $2 shops popped up in every town centre and mall, his Goldmine shops were crammed with surplus goods – factory over-runs, damaged products and clearance stock that was always cheap and gnerally far from nasty.

He would have been as much at home working a deal in the East End of London as in the streets of Auckland around Western Springs where he lived much of his life.

Like Arthur Daley (played by George Cole) chasing a “nice little earner”, he always went after a bargain and that instinct nearly cost him his life.

On April 13, 1994, Ray took a call offering a great buy and off he went downtown to the rendezvous, the old city markets building, to work a deal which left him with a bit of cream on top.

When he didn’t return to work, his family became worried. It was unusual for him not to make contact and by that evening their anxiety was high. When the usual bolt-holes turned up nothing, their worries were that he had suffered a heart attack or some other health problem.

But the next day, with the police firmly on the case and boosted by wide publicity, the black BMW with the distinctive HK8 plates was discovered in the abandoned building. Splashes of blood pointed to an attack and signs someone had tried to torch it, and Ray was quickly found bloodied and unconscious in a dark stairwell.

He had been attacked with a knife, clump of wood and hammer or pick of some sort before his assailants tried to set fire to him. And then left him for dead.

The injuries were so severe – fractured skull, jaw and cheekbone; gruesome bruising to the face and body and an eye pierced with some sort of sharp object – that doctors for a time did not expect him to survive.

Retired police inspector Graham Bell worked on the inquiry and said in a Radio Live “cold case” interview last year it had all the hallmarks of organised crime, “a Mafia-style attack, teaching him a lesson”.

Today, the bashing remains unsolved and Ray Mills left this life uncertain why he had been beaten to an inch of his life. He used to speculate it was a case of mistaken identity tied up with the massage parlour industry and shrugged off cynics who thought he knew more than he was telling.

Bell didn’t uncover anything untoward and dismissed those same cynics. He and his investigation team looked into every aspect of the Mills business world and detectives unearthed nothing to suggest he was other than “a sharp dealer who was very, very lucky to survive”.

To family, friends, customers, competitors and clients, Ray was warm, funny and generous – a self-made and hard-case man from a typically hard Kiwi background with a thousand stories to share.

He had trading running through his veins… from the early days of Harris Value House in Ponsonby through Goldmine stores sprinkled through the city in places in Grey Lynn, Morningside and Pt Chev and, well into his 80s, helping a mate set up H. R. Haddock and sons (“the best smoked fish in New Zealand”) on one of his many commercial sites, this one in Rosebank Rd.

The wheeling and dealing was the spice to his life, but family was the real big deal. He was devoted to Lusi, who became his bride when she was just 17, their five children and the array of grandchildren and great-grandchildren. Christmas at the Mills house was one hell of a do. And so were the parties, birthdays and barbecues by the pool.

Outside family and business, one of the few things that would drag him away from a natter on the street or in the supermarket was the start of the next race, certainly in his earlier years. He was a big punter and loved the horses, ready to shower drinks on anyone after a decent win, though lotto became a more passive past-time in his golden years.

As he made his money, stylish cars became one of his extravagances – Mercedes Benz, BMW and Rolls Royce – and he delighted in some of the simple pleasures of enjoying a life that could never have been imagined growing up in depression times.

One old mate tells the story of getting a call from Ray late at night, insisting “come outside now – I’ve got something to show you”. It was the 80s and mobiles were rare, but Ray had one of course – the size of a decent brick. Anyway, out popped the mate to find Ray behind the wheel of a Rolls Royce. He wasn’t showing off his latest car; he just wanted his friend to enjoy the simple pleasure of hearing the tick-tock of the vehicle’s clock as the engine purred away.

As online tributes following his death from cancer show, he was certainly a character.

“Somehow spending time with Ray cheered you up and you came away energized,” noted one mate..

“The stories of adventure, the witty commentary in challenging times, the comedic banter…” offered another.

The story that best captured his entrepreneurial trading spirit came with the number plates on his smart black BMW back in 1994.

Ray Mills became a wealthy man because of his instincts and, as New Zealand headed towards personalised plates in the late 1980s, he did some reading into plates around the world that carried a premium.

In Hong Kong, one of the most treasured was HK8 – the “HK” for the name of the then-British colony, and the “8” because it is considered a lucky number by many Chinese people.

He researched a little more in New Zealand and found the plate had already been issued under the normal licensing system. Even Arthur Daley (a car dealer in Minder) might have tossed in the towel at that point, but not this Kiwi trader.

It isn’t quite clear how the finer points of the deal were brokered, but Ray tracked the plates down-country and pitched a story about how he’d like them for a friend by the name of “Harry King”.

They were duly prised from a tractor of some sort in exchange for a handsome enough price and soon carried a new registration name… gracing the latest entry to the Mills home garage.

Ray bided his time, riding around town waiting for the bids to come in from a growing and wealthy Chinese community. It didn’t take long for them to flow, but he knew he was sitting on gold and there was no hurry when there was so much fun to be had from a cast-iron investment.

As Arthur Daley would say, the world was his lobster.