Forget about a town of 3000 homes on the Unitec land in Mt Albert – make it more like 4000 as the Government lays out the KiwiBuild programme unveiled in the election campaign.

The Labour coalition has stepped in to take nearly 30ha of the available land as Unitec continues plans to contract its education precinct into barely 10ha.

That leaves around 15ha of the vast block still uncommitted and in Unitec’s hands, and a fair chunk may end up as shops, offices and other businesses.

Today’s announcement by Housing Minister Phil Twyford closely matched the outline given by Mt Albert Inc last week, right down to the influence of KiwiBuild, but including the provision of state houses. 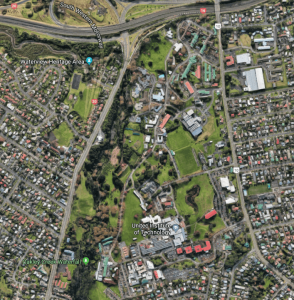 The minister, with Prime Minister Jacinda Ardern, laid out the plan at a special ceremony on the Unitec grounds this morning, but Mr Twyford showed his hand earlier on TVNZ’s Q and A, declaring: “We have inherited a basket-case.”

Before the change of Government, Unitec was looking to sell blocks of the land to private developers. But Labour, anxious to get the ball rolling on its electoral promise to quickly create more houses (and more affordable houses) came knocking late last year.

The land will now be transferred to the Crown and Unitec will obviously receive “compensation” allowing it to proceed with its education precinct plan.

The moves disclosed today show that it will soon be full-steam-ahead on the development project, raising major local concerns about traffic and the impact on local streets and schools.

In a nutshell, today’s announcement means:

In giving the details, Mr Twyford called the Government-led project “a showcase for the best of modern urban development”.

The great attraction of Mt Albert for such a development was its “superb transport links” – with the adjacent railway station, the planned light rail link to Pt Chevalier, plenty of buses and cycle lanes. Developers might even take the view that “you don’t need to own a car to live there”.

Speaking broadly rather than just on the Unitec project, Mr Twyford said: “We are going to be flooding the market and we are going to change the market. You will not see the high levels of capital gain that have been a feature of the last few years.

“… We have had to start from scratch to build a platform for a massive Government back-building programme – we are going to throw the kitchen sink at it and no stone will be left unturned.

“The crisis is so bad that it requires ambition. It requires bold and creative approaches. If we apply ourselves we will build a supply chain of beautifully-built modern homes for Kiwi families.”

More details will ease out over the coming weeks and months. But the local community will anxiously await the new masterplan for the site and look for confirmation from the minister that a “medium density” development is on the way.

The mere mention of potentially 4000 homes – on top of the several hundred likely to rise on the Ngati Whatua land on the western boundary of the block – will certainly raise concerns because 3000 was always seen as the upper limit. In the end, Auckland Council, with its eye on traffic congestion, will have the final say after working through the required Integrated Traffic Assessment (ITA) before consents are granted.

Up to 4000 homes on 30ha is the sort of density Auckland is moving towards, but the impact on traffic flows will be substantial. The quiet side streets and the cul-de-sacs that will be turned into through roads will never be the same again once the hammers start swinging.

Full backgrounder on the Unitec site