The way we were

OVER the 700 years or so that people have lived around the dormant volcano, the maunga has taken quite a few names.

Two remain in use: Owairaka and Mt Albert.

Owairaka can claim to be the founders name, a character who could have been the model for the Disney movie Moana.

Wairaka was the daughter of Toroa, captain of the great voyaging waka Mataatua. Coming from Hawaiki they ended up in the eastern Bay of Plenty. At Whakatane the canoe drifted dangerously. Tradition has it that Wairaka saved them all, after first exclaiming ‘Me whakatāne au i ahau nei!’ (I must act like a man!). 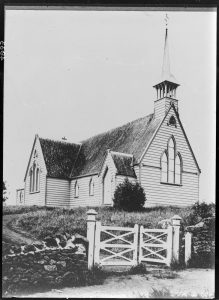 Later, reputedly to avoid a marriage she was not keen on, she left Whakatane and came north to Tamaki-makau-rau. She established a pa, complete with gardens and storage, on the maunga, thus giving it name Owairaka, or ‘Wairaka’s place’.

Over the centuries since, Owairaka, on a border between Tainui and Ngati Whatua o Kaipara, was fought over several times, and in time the people moved to the coast, both for safety and for food. With the arrival of the pakeha and the musket wars, led by Hongi Heka, left much was empty of people.

The London Missionary Society’s Samuel Marsden is reputedly the first pakeha to have climbed Owairaka. He did in 1820 with Ngati Whatua chief Apihai Te Kawau. Marsden described it as “very high round hill’ noted the view as a ‘most extensive prospect’.

After the signing of the Treaty of Waitangi was signed in 6 February 1840, the lieutenant governor William Hobson decided to set up the colony’s new capital at Tamaki-makau-rau.

A lot of imperial renaming accompanied his move. Just four days after the treaty was signed, the young Queen Victoria married Prince Albert of Saxe-Coburg and Gotha. While Devonport’s more prominent maunga was named Victoria, Owairaka became Mt Albert – one of hundreds of places around the world named after him.

Ngati Whatua sold much of the land that became Auckland. 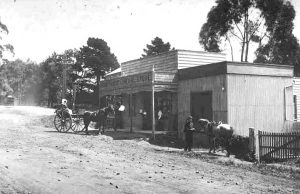 In those early days Mt Albert, Auckland’s second suburb, was less than desirable.

Access from Auckland was rough. Whau Road which became New North Road, was not an attractive trip and parts of it were hampered by a large swamp (from which Eden Park eventually rose out of). The land itself was volcanic and less than suitable for the style of farming then practiced.

Among the first to take the risk in 1845, was one Robert Hunt, who purchased 24ha around today’s Ferndale for £180. Speculator and farmer Thomas Henry purchased six lots on the mountain’s north eastern slopes in 1844 and then on-sold them in 1849 to Allan Kerr Taylor who paid £450.

Taylor came to dominate Mt Albert developments from what began as his farm house at Alberton. One of the driving forces then, as now, was Auckland’s growing population. Mt Albert was integral to the booming Auckland.

In 1866, a Mt Albert District Highway Board was declared. It could strike a rate, based on property values, and build roads. Taylor was in charge and drove the development on. There was uproar when these came out in 1867 with eight-fold increases.

Physical attack on board chairman

Taylor, who was the board chairman, was physically attacked. When the rates were cut, road improvements diminished. It proved to be a drawn-out affair which, even now, still characterizes some of Mt Albert’s politics.

Like many of the Mt Albert pioneers, he came with a touch of religion; in his case he was Methodist.  He donated the land for the area’s first church, which remains there on the corner of New North and Alexis Avenue. 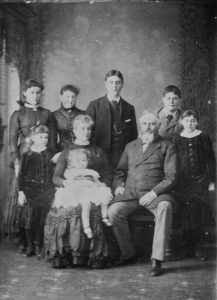 Taylor, who more than many created modern Mt Albert, was sitting with his family at 5.30pm on 14 April 1890 when, the Auckland Star reported, ‘he suddenly fell off his chair and died in the arms of his eldest daughter.’ He was 56. His funeral and burial at St Luke’s Church drew a large crowd. As the New Zealand Herald put it: ‘Mr Taylor will be much missed in the Mount Albert district, as he was a good settler, a good neighbor, and a good man.’

His body was later moved to another grave. Mt Albert at the time drew much of its water from Western Springs and there were reasonable fears that a grave yard on its catchment area was not wise.

Owairaka’s roundness first took a blow when, for road building, it was identified as an ideal source of scoria. Quarrying began to disfigure the peak.

Their arrogance was replayed in 1973 when the government’s Department of Scientific and Industrial Research ignored local planning rules and erected a seven-storey concrete slab building erected next to Alberton. It remains a source of discontent.

The railway saw the first passenger trains in Mt Albert on 29 March 1880. Post offices were opened in Kingsland and Mt Albert.

Auckland’s population tripled between 1901 and 1931; Mt Albert’s population went up tenfold – from 2,035 to 20,600. To service them, electric trams were built, with the line reaching Mt Albert in 1915. Until the lines were ripped out in the early 1950s, there was a tram every eight minutes between Mt Albert and the city.

Given that most people worked in Auckland, Mt Albert attracted wags to say it was a suburb people came to sleep in. 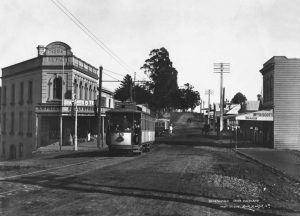 The first school was begun in 1870, eventually to become Mt Albert Primary.

The same religious groupings that dominated early Mt Albert were also responsible for the suburb to be one of New Zealand’s longest established alcohol free zones. Until 1999, it was not possible to have a restaurant meal with wine, anywhere in Mt Albert.

The suburb was still a borough when in 1971 the then modest St Luke’s Shopping Mall was opened – the second for Auckland after Lynn Mall. The council had been reluctant about it but felt they could not stop progress. The arrival of the mall began the decline of the Mt Albert shops.

While Mt Albert was looking civilized, if a little odd for its dryness, it did not have a library. In 1968 Frank Ryan, campaigning to become Mt Albert’s mayor, sent out a flier asked voters whether they wanted a library and whether they would pay for it. Hundreds responded with a 95 percent in-favour reply. 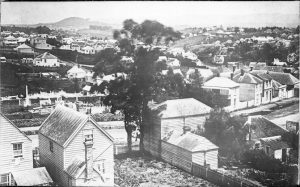 The inevitable political struggle followed but four years after the mall was opened, it got its neighbour, the Mt Albert Library.

Mt Albert has always been a Labour Party electorate, since it was created in 1946. Its first member was Arthur Richards who died soon after he won it.

In the by-election that followed, the seat was won by Labour’s Warren Freer who held it until 1981.

When he retired, the seat was won by Helen Clark who held it for 27 years, including nine years as prime minister. She even lived in the electorate. David Shearer, who was briefly Labour leader, took over the electorate before taking up a major United Nations’ post in South Sudan. The seat is now held by Labour’s Jacinda Ardern.

There were a couple of other political connections in Mt Albert. As a boy, future prime minister Robert Muldoon was a pupil at Mt Albert Grammar. As a law student, David Lange flatted in Morningside.

Wairaka’s place has always been lively.