The new principal at Mt Albert Primary School is no stranger to the local community – and her goal is to make it “the school of choice” for parents and pupils.

Marian Caulfield, who took up the reins at our oldest primary school at the beginning of the fourth term, spent several years at Gladstone Primary as deputy principal in the 1990s.

It was the memory of her time at Gladstone that tempted her to make the move from Dominion Road Primary, where she had been principal for the past 17 years.

“Working in the Mt Albert community again really appealed to me and I had heard good things about this school, so this opportunity came up at a good time,’ she says. 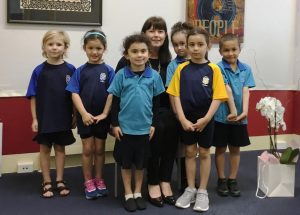 Marian Caulfield (pictured here with some of the school’s pupils) is described in Dominion Rd Primary’s most recent ERO report as a “respected and trusted principal”.

She says her first priority is to get to know her new school community and has lost no time in arranging a series of sessions during her first month at the school for parents to meet her.

It is, she says, too early to start talking about her aspirations for the school, but her first impressions are of a friendly and diverse school community, with pupils and families engaged in learning.

The new principal is diplomatic in her choice of words when questioned about perceptions that the school may not be the preferred option for many families in the community.

“Every school wants to be the school of choice for their community – Mt Albert Primary School is no different to that, and I will be working with staff and board towards that goal.”

The school has seen considerable roll growth in recent years, particularly across the last 18 months, prompting the introduction of an enrolment zone earlier this year of which a portion overlaps neighbouring Gladstone School’s zone.

This is quite a turn-around from the previous two decades where the roll languished compared to neighbouring schools, hitting a low of 153 in 2005.

Former Principal Unasa Enosa Auva’a was farewelled from Mt Albert Primary at the end of Term 1 this year, after spending 26 years at the school.