A pig’s ear is not good enough

Six weeks after Jacinda Ardern joined Mt Albert to cheer the end of the village upgrade, there are still big problems. It was never going to be perfect, but why has Auckland Transport been so slow to make things better? asks Bruce Morris

OPINION: If the officers of Auckland Transport were up for election rather than a weekly pay cheque, perhaps they might devote more energy to resolving the imperfections of the Mt Albert village traffic flow.

Why can’t they sort it? Why are the city’s traffic experts making such a pig’s ear of the mission to keep things flowing as best they can following the village upgrade project?

The upgrade itself, in the hands of contractors, was tortuous enough and AT chair Lester Levy conceded as much by saying he had told his CEO to find a model for future projects that could be completed quicker and with less upheaval. 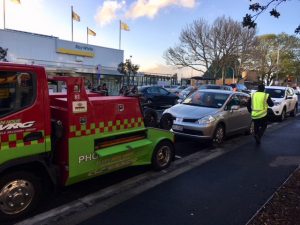 The new village layout is hardly perfect, but it’s not bad at all – much more inviting, if a little stark (why on earth did they decide on chunks of scoria beneath the trees rather than greenery and flowers?). Shop owners are yet to grasp the opportunities offered by the wide footpaths and Auckland’s winter doesn’t help. But hopefully the spring will encourage businesses and their landlords to make the best of the platform built on their doorsteps.

The traffic flow is another thing altogether, however.

Though AT didn’t exactly labour the point, everyone knew – or should have known – there would be a price to pay for a smarter village strip beyond the loss of parking spaces and the damage to businesses during the build period.

With 40,000 new vehicle registrations hitting Auckland roads in the time taken to complete the upgrade, transport officials could reasonably make the point that this is more a project for tomorrow than today.

The big improvements will in due course attract the developers, and apartment buildings with street-level shops will replace some of the nondescript retail landscape; on the roads, buses, cycles, light rail and shared cars will be the future in a city that will hit two million people around 2030.

But that doesn’t mean those same officials were spared the responsibility to use their vast experience to make the traffic flow as best they could.

Now, a full six weeks after the Prime Minister joined Mt Albert to celebrate the end of the upgrade, Auckland Transport is still to deliver the goods. That is just not good enough.

Fine-tuning was of course always expected once the new road layout was ready on May 19, and there were the inevitable light-phase mess-ups. But some things that should have been done from the word go remain, seriously hindering traffic flow and irreparably damaging public goodwill towards Auckland Transport. 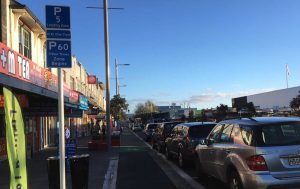 A single all-hours parking space opposite Barfoot and Thompson stands as a symbol of the project’s imperfections, and the irony is that AT didn’t want such an isolated barrier to a two-lane flow.

Against its better judgment, the agency created the lone spot as a concession to businesses complaining at the removal of too many carparks. The project leaders should not have yielded, and the sooner the obstruction is removed the better.

In the village itself, the clearway zone (no parking between 4pm-6pm) that should allow two lanes of Avondale-bound rush-hour traffic was created and then more or less ignored by AT.

For the last six weeks it has been full of illegally-parked cars, slowing the west-bound flow as vehicles in the left lane are forced to shift right – at times leaving vehicles stranded in the middle of the intersection when the lights change.

Mt Albert Inc first raised this issue with AT in May and was told on June 1 that the problem was an associated loading zone sign that was confusing and could mean a legal challenge in court for clearway intruders. The sign would be changed “next week” and policing – cars ticketed and towed – would then begin to help the peak-hour flow.

Well… If the sign has been changed, the operator needs a quick course in communication. Today (see picture above) it reads “P5 loading zone”. Beneath that, in a separate block on the same pole, is “At All Other Times”. And under that comes another block, reading “P60. Other times. Zone begins”.

What the hell does that mean?

The fact it stands 20m inside a clearway zone (no parking 4pm-6pm, Monday to Friday) marked by two signs 100m or so apart certainly gives rise to the suggestion a ticket could be laughed out of court.

But it hasn’t really mattered because Auckland Transport’s policing of the zone has been pathetic.

Last Thursday, more than three weeks after the ticket-writers and tow trucks were promised, they finally arrived. But the deterrent factor was too little too late; vehicles continued to park in the zone as the towies went about their business.

Friday night? Not a sign of a ticket-writer or a tow truck, and the zone was again full – with at times the absurd sight of both lanes blocked when illicit parkers reversed into spots.

On Monday, an AT parking warden arrived at 4.20pm to find the zone parks mostly filled. He wrote a handful of $60 tickets, warned a number of arriving vehicles about the risk they faced and oversaw a tow truck driver who hauled away one car. Then, shortly after 5pm when the zone was clear, he was gone. Fifteen minutes later, half a dozen cars were back parking there, halting the two-lane flow.

Tonight, no sign of a tow truck or parking warden – and the clearway was again a free-for-all.

It must be a logistics nightmare dealing to 15 or 16 cars filling that clearway zone, especially when fresh arrivals fill a vacant space as the tow truck disappears with its load. But unless the policing starts and is serious (and word gets around), the problem will be there forever.

First step, though, is sorting out the signs. The loading zone sign needs clearly to indicate a five-minute drop zone except between 4pm-6pm, Monday to Friday. As well, there should be another clearway sign, in the middle of the zone; passing motorists unfamiliar with the village strip have a fair argument when they complain, “I didn’t know”.

Get the signs right and then hammer the culprits. But get it done!

The east-west flow (Mt Albert Rd to Carrington Rd and vice-versa) is the other main problem and it has been there from the beginning, with queues regularly extending back past Allendale Rd, and to Woodward Rd to the west.

Social media came up with what seemed a simple solution to dramatically boost the flow: give the right-hand turn lanes (generally carrying just two or three vehicles, if that) a short, shared light phase and then allow through traffic from both directions the same phase, effectively doubling the existing time.

This “solution” was supported in a post on Mt Albert Inc,  and it seems so logical, with the potential to push through twice the volume of east-west traffic in the same time-span.

The option has been raised several times since with Auckland Transport from different sources, but draws no considered reply. While there may be some buried reason it can’t be tried, it almost seems as if AT has decided it won’t be guided by a bunch of amateurs.

So six weeks on since the red cones finally went – and after all the initial fine-tuning and mishaps and cockups over things like road markings, signs and sensors – we are still stuck with an intersection that falls well short of what it could be.

It will never give a perfect result… at least until cycles, light rail and Uber jets rule the city.

But it could be a damn sight better with a can of blank-out paint, a tinker with the light phases, some sensible signs and the sort of regular policing Auckland Transport gives to Grafton Bridge and downtown bus lanes.