Jacinda Ardern on Unitec: “When it’s… in your own backyard, I will be taking a special interest.”

The Prime Minister has an impossibly tight diary. But she found 20 minutes for an interview with Mt Albert Inc, offering views on the Unitec plan, local schools, the Chamberlain Park development and life in the suburbs. Pictures: Julia Thorne [Images copyright – Julia Thorne Photography]

Jacinda Ardern has given a commitment to Mt Albert people that the Unitec development will be “gold standard” and certainly no blot on the local landscape.

The Prime Minister had an unqualified reply to the question: Can you give the people of Mt Albert a guarantee that Unitec will be a stylish and attractive development that enhances the area rather than ends up as a blot on the landscape?

“Yes, yes, absolutely – keeping in mind our whole approach here is wanting to make sure that this is a gold standard because it is one of our first major proposals so it is very important to us.” 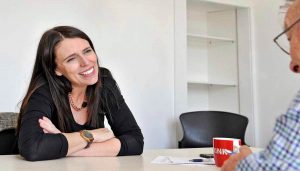 “Our focus is absolutely on quality urban design. That means green space, access to public transport and a desirable place to live,” she said. And as local member she would be keeping a very close eye on the development.

But things can get away from you, right? After all, there’re only so many things a Prime Minister can keep a finger on.

The reply is crisp, and Housing Minister Phil Twyford has no doubt heard the point: “When it’s your first major development and it’s in your own backyard, I will be taking a special interest.”

Ms Ardern makes it clear that, while the coalition Government arrived late with its housing proposal for the surplus Unitec land, she closely followed the original plan to sell the land to private developers and knows the local concerns.

Referring particularly to the real risks that peaceful culs-de-sac becoming busy through roads – and the need to preserve heritage buildings – she says: “I have talked to Phil Twyford about that and I know residents are concerned… My existing view is that there’s a way to build this development and deal with issues around culs-de-sac, green space and heritage buildings.”

So, what does that mean – that there’s some sort of prime ministerial reprieve on the way to the people living in the culs-de-sac on the southern edge of the Unitec precinct? 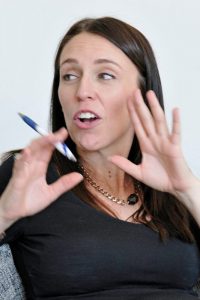 Not exactly. Sympathy certainly and a highly-placed advocate in Mt Albert’s corner. But she’s not going to be pinned down before the plans are revealed and the smoke and mirrors have cleared.

One area of the future Unitec land the Prime Minister is more precise on: the need for a new school to cope with the population growth that will come over the eight years or so it will take to build the expected 3000 to 4000 new homes.

While the apartment-dominated site will hardly be nappy valley, the Ministry of Education’s own projections suggest around 500 children will, in time, be living on the land.

Ms Ardern says the criticism of local schools excluding the Unitec land from their zones is unfair and unwarranted. Schools like Gladstone Primary and Mt Albert Grammar are feeling the squeeze, she says, because there hasn’t been enough planning generally around roll growth in Auckland.

“We know that we have to have the plans in place to deal with the expectation we have around how many children will flow from this development. Have we resolved that yet? No. We have to make sure that we are not simply in a haphazard way allowing those surrounding schools to pick up the pieces.”

All of which sounds like a direct criticism of the Ministry of Education.

But the Prime Minister says: “I am always wary about slating this back to public servants. It is our job [as politicians] to make sure we plan properly for the future… if anything I have seen from planning for this budget, it is that forward forecasting just wasn’t done the way it should have been.”

Expanding the point, she says politicians make the decisions…. “I don’t think we were planning the capital expenditure that was required early enough and simply making sure we have enough teachers.”

The Government was “absolutely asking questions. We know there’s been some argument from the ministry that there is capacity in the west and we need to look at whether that is going to be sufficient. Education is one of the things that I’d say is top of mind for planning and development at Unitec.”

And, looking ahead, it would surprise her if a new school was not built in the mid-west within the next 10 years. 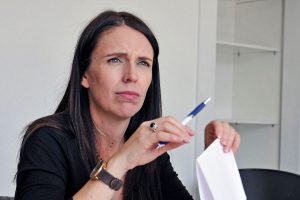 On another contentious local issue, the development of Chamberlain Park, Ms Ardern says her bottom line is the need for green space to be preserved in an area “where there’s not as much as there could be”.

She takes mild exception to the suggestion she’s sitting on the fence with that response because neither the plan by the Albert Eden Local Board to redevelop the course nor the status quo preferred by the golfing lobby would invade Chamberlain Park’s green space.

“I want golfers to have access to a course, but I would be more open-minded on discussions around what that looks like and whether there’s room for multi-use [as proposed by the local board].”

So what does that mean – that she would be more sympathetic towards the board’s plan to replace an 18-hole course with a nine-hole one, opening up the rest of the land for recreational use?

Yes, she says. But in a classic politician’s bob-each-way, she knows there are strongly-held views against the board’s position and believes people wanting to express them should be given ample opportunity to do so.

Ms Ardern and partner Clarke Gayford this year moved from Pt Chev to a new home in Sandringham and school zones were certainly not on her mind when the decision was made.

With a baby due next month, the Prime Minister will happily send her child to Balmoral Primary, her local school, if the family is still living there in five years. 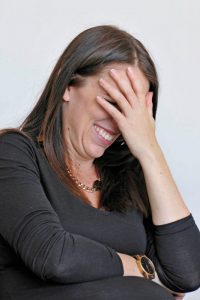 “I was a state school girl and went to my local schools everywhere I lived,” she says. “I had a great education. I live near Balmoral school, I know the principal, I know it’s a great school.”

She and her partner are “very determined to keep as much normality in our lives as possible. We still go to the supermarket together. We travel in our own vehicle by ourselves and I still drive… I still have my nieces come and tear my place apart!”

After a little over six months as Prime Minister, she has had to accept that security “comes with the job”. Is it suffocating?

“It is unusual and does takes a bit of getting used to,” she says.  “At the supermarket and having someone hovering around the aisles with you – that’s a bit unusual. Maybe I’ll never get used to it. But they’re wonderful people and so that definitely helps.”

A British newspaper found it interesting to learn from Clarke Gayford that in trusting New Zealand it’s possible for the PM’s household to order Indian takeaways without too much fuss.

Well, in a typical suburban Auckland street perhaps. Not so easy in Wellington when the caller gives the address as Premier House, the official residence of the New Zealand Prime Minister in plutey Thorndon. Jacinda Ardern tried that in very early days as PM, but went hungry.

“I thought someone would have done that before, but they wouldn’t take the order because they thought it was a joke! I don’t know what other address I was meant to give – that’s where I live after all!”

No new school on the Unitec land, says ministry