Plans by Auckland Transport engineers to tackle the dangers of the Asquith Ave/New North Rd intersection are starting to take shape – and locals will have a say in the final outcome.

The issue has flared over the last week after a Mt Albert Inc story referred to the intersection as “prang alley”, provoking a strong Facebook debate with a wide range of “solutions”.

At the time, no one knew AT was, behind the scenes, already looking at making the intersection safer. As the local debate flared, engineers were arranging meetings with business at the intersection to outline the broad scope of their plans – and now at least some news has emerged on options.

Richard Peck, of Kelly Workshop, met with AT staff this week and came to the conclusion that the existing no-right-turn sign and “island” (in picture above) on New North Rd is likely to be removed because it is seen as a distraction. However, of course, the no-right-turn rule will remain for traffic heading toward the village. 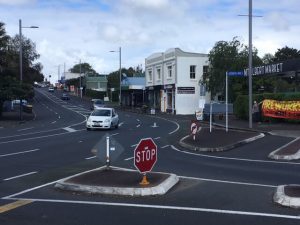 He thought the plan at this stage was also to reshape the island at the entrance to Asquith Ave, pushing it back a little from New North Rd – allowing easier access to Asquith and making the corner less prone to accidents. This would have an impact on the width of the entryway from Asquith Ave into Taco Loco and the courtyard used by the Friday food trucks and the Saturday farmers’ market.

Richard said the officials seemed to indicate there was no intention to introduce lights or ban right-hand turns out of Asquith Ave.

The council-controlled body today responded to Mt Albert Inc questions over the intersection – and revealed that the range of options include leaving things as they are, realigning the Asquith Ave exit/entrance, and introducing a right-hand-turn ban out of Asquith.

Mark Hannan, AT’s media relations manager, said crash data showed the intersection was one of the most high-risk in Auckland.

Previous efforts to address traffic and safety issues included the no-right-turn rule into Asquith Ave from New North Rd that Auckland City Council instigated around 2006, and the redesign of the intersection in 2010.

Mr Hannan said AT held discussions with businesses and residents that might be affected by any proposed changes as part of the investigation process for any project.

Those pre-consultation discussions were specific to a resident’s or business’s situation and helped road engineers and planners to understand the impact of any changes. Once AT had determined what it believed to be the best option at the intersection, it would start a consultation process – probably in six to eight months.

Mr Hannan said AT did not at present have a preferred option or any expected outcome. The range of options included keeping the status quo if there was significant public opposition to any proposed changes, realigning the intersection to minimise driver exposure when turning out of Asquith, and introducing a right-turn ban out of Asquith Ave.

AT would also need to consider what flow-on effects would result from any change to the intersection, he added. A right-turn ban out of Asquith Ave would likely see an increase in traffic on Alexis Ave, Maybeck Road and Burch St – all of which had a higher safety risk for drivers turning right onto New North Rd.