Auckland Transport’s “solution” to the traffic problems at the intersection of New North Rd and Asquith Ave is moving to the detailed planning stage after engineers considered around 40 proposals from locals – opting to set most of them aside.

The major improvements to “prang alley” – as Mt Albert Inc referred to the intersection in a range of stories – will probably be in place within the next year or so. AT says it expects to do the job between July and June 2019, “subject to further changes in design or funding issues”.

Not surprisingly after its own detailed analysis, the council agency has rejected most of the local submissions, and given explanations for its stance. However, it has indicated it may make some “minor changes” as engineers prepare the detailed plan, which will be disclosed over coming weeks.

As the proposal stands (with perhaps fine-tuning to come), the intersection upgrade will include: 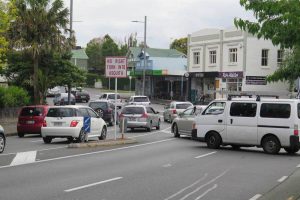 AT makes these points about the local feedback:

Requests to remove the bicycle lane (a) into Asquith Ave, and (b) along New North Rd. AT: We aim to make roads more user-friendly by developing and maintaining facilities for all road users, including cyclists.
Concern over whether the “Swedish Speed Table” will be substantial enough to slow drivers as they approach the cycle lane and pedestrian crossing. AT: The speed table will be constructed at a height of 100 mm to effectively slow vehicles as they approach and drive over it.

Concerns that a more streamlined left turn from New North Rd on to Asquith Ave will allow drivers to speed through the intersection without indicating, causing a safety hazard. AT: As there is a pedestrian crossing facility at the beginning of Asquith Ave, speed management is crucial. The speed table will prevent drivers from turning left into Asquith Ave at high speeds, improving pedestrian safety.

Requests to provide a refuge for vehicles to queue in the centre of New North Rd after pulling out of Asquith Ave. AT: The purpose of the traffic island relocation on New North Rd is to allow vehicles turning right out of Asquith Ave a more direct route to the flush median, reducing the time they are exposed to oncoming traffic. The aim of this proposal is not to provide a queuing space for vehicles to merge into westbound traffic. 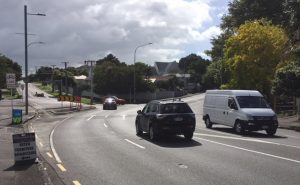 Suggestion to replace current flush median and expand with road markings that would delineate the zone as a vehicle refuge. AT: New North Rd is a major arterial road with large traffic volumes, often including heavy trucks. The proposal will expand the flush median to a width of 3m from 2.5m; however, we are unable to widen the flush median any further without compromising the capacity and efficiency of New North Rd.

Concern that installation of flexi-posts could cause confusion to motorists. AT: Operational issues have not been observed at other locations in Auckland where similar flexi-posts have been installed.
Request to remove flexi-posts from the proposal. AT: The purpose of the flexi-posts is to further reinforce the “no right turn” into Asquith Ave.
Suggestion that the flexi-posts are not overly sturdy and that a low maintenance alternative should be considered. AT: We will examine all possible options when finalising the detailed design plan.
Concern regarding the visual appeal of the rubber cycle buffers to be installed. AT: To maximise safety benefits to cyclists, the rubber cycle buffers will need to be bright and reflective.
Requests to adjust the extent of the first set (west) of rubber cycle buffers. AT: We will review the extent of the rubber cycle buffers in the detailed design phase; ultimately, we will decide to install the option that provides the most safety benefits to cyclists and other road users.

Request to add left and right-turn lanes out of Asquith Ave. AT: Vehicles exiting Asquith Ave do not appear to experience significant delays during peak traffic periods, so we are unable to justify road widening to accommodate another lane.
Suggestion to install a traffic camera to monitor and deter right-hand turns from New North Rd onto Asquith Ave. AT: Currently, we only install traffic cameras at signalised intersections.
Request to prohibit turns into Asquith Ave at peak times. AT: Based on our observations, left-turns into Asquith Ave do not cause major conflicts with other operations at the intersection.
Requests to prohibit right-hand turns out of Asquith Ave on to New North Rd. AT: As outlined in the consultation letter, prohibiting right turns out of Asquith Ave would only push demand to nearby intersections, which are less equipped to handle the traffic volume.
Request to either (a) widen or (b) adjust the angle of the lane out of Asquith Ave on to New North Rd so that vehicles turning right out of Asquith Ave are not forced to turn at a 90 degree angle. AT: There are a number of factors preventing us from widening this lane, the most important being pedestrian crossing distance. Widening the road at this point also means increasing the distance pedestrians would need to cover to get from the pedestrian refuge to the footpath, thereby putting them at greater risk.

Request to install signage or a physical mechanism (like rumble strips) warning drivers heading eastbound along New North Rd to slow down. AT: We will examine further methods of speed calming during the detailed design stage.
Concern that speed bumps do not fully dissuade drivers from speeding. AT: The speed table proposed will be at the maximum height of 100 mm, which has demonstrated in other locations to effectively decrease the speed of vehicles.
Request to reduce the speed along New North Rd to 40km/h. AT: A significant reduction in the speed limit is likely to result in an increase in traffic congestion; 40 km/h speed limits are reserved for school zones only.

Concern that vehicles turning out of Asquith Ave often fail to stop. AT: Based on our observations, this has not been identified as a common issue at this intersection. The speed cushion will help address the situation by forcing vehicles to slow on their approach.
Concerns that vehicles turning into Asquith Ave frequently fail to indicate, causing confusion for other drivers and pedestrians. AT: Unfortunately, this is a behavioural issue that cannot be directly addressed through engineering means. Installation of a speed table for the pedestrian crossing facility will force vehicles turning into Asquith Ave to travel at a slower speed.
Concern that the tail ends of vehicles waiting in the median strip to merge with westbound traffic along New North Rd often overhang the inner eastbound lane. AT: The proposed flexi-posts that will be installed along the edge line of the flush median will better delineate the two opposing traffic flows.

Concern that the central traffic island on New North Rd is often used as a pedestrian refuge. AT: The proposed cycle buffers and the relocation of the central island on New North Rd will discourage pedestrians from crossing at this point on the New North Rd.
Request to install a sturdy barrier between the footpath and the road at this location to prevent injuries to pedestrians. AT: Installation of a barrier at this location would not be a practical solution as it would likely impede access to driveways.

Concern that the proposal is not far-reaching enough and is not a good use of taxpayer funds. AT: As outlined in the consultation letter, several other options were considered during the investigation phase – such as lights and roundabout – and this option was chosen after careful evaluation. Although this option is the best solution for this intersection at this stage, we will continue to monitor after the implementation for future upgrades.

Suggestions to signalise the intersection at peak times. AT: Signalisation during peak hours would likely lead to confusion for drivers during off-peak hours, increasing the risk of accidents at those times.
Concern that lighting upgrades would adversely impact local residents. AT: Standard lighting design has been prepared to ensure the road is sufficiently lit but with minimum light spill into the adjacent properties.
Concern that traffic lights along New North Rd contribute to congestion and safety hazards. Suggestion to adjust the traffic light timers to allow more traffic through. AT: Signal phasing will be reviewed during the detailed design stage to ensure compatibility with the proposed changes so that traffic along New North Rd flows smoothly.

Requests to resurface the road with high traction surfacing to prevent vehicles from slipping and losing control in wet conditions. AT: Adjustments to road surfacing will be examined during the detailed design stage.

Concern that the Asquith Ave driveway to Mt Albert Market will be adversely affected by the proposal, causing safety concerns for vehicles entering and exiting. AT: A tracking model was undertaken for vehicles that currently access the driveway. The proposed design will not impact accessibility.

Request to relocate “no right turn” and “keep left” signs further east along New North Rd. AT: During the detail design stage the locations of the signs will be reviewed to ensure that they do not block driver visibility.
Request to install a traffic mirror on the New North Rd central traffic island. AT: We no longer install traffic mirrors as images are often misleading and inaccurate. The proposal allows for a complete view of traffic in both directions, so traffic mirrors would not be necessary.
Concerns that the camber of New North Rd contribute to existing issues. AT: In the detailed design stage, the road surface will be evaluated to insert additional friction grip treatment where appropriate.
Requests for additional works (which were regarded by AT as “out of scope for the intersection proposal and therefore not considered) include:
Concerns that accidents occur when vehicles heading westbound along New North Rd attempt to make right turns into businesses on the opposite side of the road.
Request to relocate bus stop No. 8231 further westward towards the Mt Albert shops.

Mt Albert Inc story when AT first disclosed its plans