Q and A spotlight on Bruce Paine

Bruce Paine is a noted New Zealand classical guitarist and guitar composer who lives on the slopes of Mt Albert. He presents concerts locally and around the country, and makes CD recordings of his work that are frequently broadcast by Radio New Zealand. Bruce has written music in response to commissions from top guitarists and freely for fellow guitar enthusiasts. His past experience in computer programming lends itself to assisting his siblings with websites for their businesses. When time permits he enjoys gardening, pounding the lanes of Lovelock Track and a newfound interest in cycling.

So how did you get to Mt Albert?
I was born in Epsom and brought to Mt Albert in a carrycot on the back seat of the family car. My parents moved to the suburb in 1953. I became number five of a family of six.

Tell us about your childhood
I grew up in the late 1960s and 70s when everyone knew just about everyone else in the local neighbourhood. The ‘Aloha’ dairy on Richardson Road (now the “Thai Smile 2” takeaway opposite Muzza’s Pies) sold ice-cream in a cone, ice blocks, milk shakes, thick shakes, sherbet fudge and lollies by the paper bag full costing just a few cents. The Rodgers’ toy shop next door was another lure to the local shops. It was safe to cycle almost anywhere within quite a wide radius, many kilometres from home. My siblings and I think Mt Albert was a great suburb to grow up in.

Your first job?
Music is my passion and I have great memories of my very first public guitar concert in 1989. The performance took place in an acoustically-inspiring, octagonal church in Glen Eden and was shared with fellow guitarist Rex Button. There was a large audience, the playing went very well and we had the pleasure of donating all proceeds to Amnesty International. I have since pursued a career in classical guitar music and been involved with computer software programming.

The most uplifting moment of your life?
I’m still waiting for something truly momentous to happen! But again in terms of my music career, the most uplifting moment was realising that I was able to reliably perform a long programme of challenging guitar music from memory, without following sheet music. The most uplifting concerts are those where everything goes exactly to plan or better. I have been fortunate to have played in Australia, Austria, the Czech Republic, England, France and all around New Zealand.

The saddest?
Apart from personal loss and problems affecting my family, I’ve been fortunate not to have to endure many truly sad moments. Though I recall being saddened by the demolition of the central city Brown’s Mill along with other historic buildings to make way for a modern tower block. I have great memories of my weekly guitar lessons at the Mill and the creaking, crooked staircase to the top floor studio. It was a unique part of the city that could have been preserved for future generations to appreciate and as a window to our past. 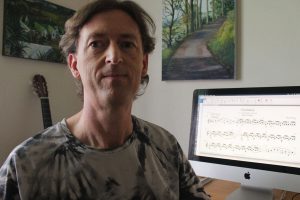 Things you’ve learnt about life that you will take to your grave?
Life is a complete mystery!

What’s made you very proud
Having my classical guitar compositions performed by masters level university guitar performance students and included on international CD releases by professional musicians. My music has been regularly broadcast by Radio NZ since the 1990s and a 2017 achievement was having a piece broadcast for the first time on ABC Classic FM in Australia. I am also proud of the seven (and counting!) guitar music CDs I have produced along with a 150th commemorative CD/DVD for historic Alberton in 2013. The Alberton DVD is given to couples getting married at the venue and makes for a lovely memento for them of their special day

What makes you damned angry?
I tend not to lose my rag and if I do I’m probably in need of refuelling (i.e. food and water!)

What could you not do without?
Regular exercise to create balance. The work I do involves considerable mental energy but not much movement. It goes without saying but I couldn’t be without my family. We all enjoy our time together. I also couldn’t do without space and quiet time to reflect and work on music.

The thing you have always wanted to crack but haven’t yet managed?
I can think of several challenges that seem far from reach. Making a viable living as a classical guitarist is one, selling music merchandise profitably is another! Other daunting challenges include writing effective music for symphony orchestra or instrumental ensembles, writing a film score and composing a guitar concerto.

Who are the people (past and present) you most look up to?
At about 1.94 metres (6 foot 4 inches) tall, I tend to look down on most people apart from the occasional basket ball player! I look up most to those who serve or care for others tirelessly, selflessly and in less than ideal circumstances, without seeking recognition or titles.

What personal frailty (in others) do you most detest?
Well, detest is a strong word but the habit of publicly criticising the efforts of others while standing on the sideline doing nothing is certainly worthy of some demerit points!

What about yourself – do you have flaws you wish weren’t part of your make-up?
What? No, I’m perfect! Seriously though, I do tend to be a perfectionist which in some respects is a strength but also a weakness. It is easy to spend too much time worrying over small details while missing the overall picture and ending up with a result that is…well…far from perfect!

We all have regrets – what are yours?
I don’t believe in dwelling on things in the past that cannot be undone. We’re human and mistakes do happen. I believe in doing the best you can, or better, and learning from your mistakes if they happen.

Describe your perfect weekend
Relaxing with family, exercising, enjoying the outdoors, tending the garden, good food and drink, making or listening to music, A relaxing bike ride on a fine day would also put a smile on my face too. What more can anyone want?

What about that magic dinner party – who would share your table?
If it was possible to bring people from the past to life and have them speak English, I’d dine with a mixture of famous composers and guitarists of old.

What would be on the menu?
Alphabet soup, eggs Berlioz, schnitzel with noodles, Crisp apple strudel, Bizet cake, coffee and Mozartkugeln for afterwards.

And the music in the background?
A selection of calming French impressionistic music such as Claude Debussy’s ‘Prelude l’apres midi d’un faune’ (Prelude to the afternoon of a faun), Clair de lune (Light of the Moon), La fille aux cheveux de lin (Girl with the flaxen hair).

What about books and writers – what/who will stay in your mind until your dying day?
Perhaps not very profound but I found Barry Green’s ‘The Inner Game of Music’ most helpful when as a music student grappling with performance nerves. I’m often reminded of the advice gained from that particular book.

Your favourite movies?
I’m not much of a film watcher but was most impressed with Dunkerque (Dunkirk) last year.

Watch much television? Favourite shows?
My TV’s ‘off’ and ‘mute’ buttons are gaining popularity more and more these days! The Netflix series ‘The Crown’ is proving quite entertaining. I am a sucker for informative TV documentaries about the discovery and restoration of things from the past, particularly rare or historic automobiles, ships, steam engines and aircraft.

What are your biggest concerns for the future (locally and elsewhere)?
Pressure on Auckland city’s ageing infrastructure due to increasing population. Sweeping and rapid change. Mt Albert gradually losing it’s old identity.

Traffic has been on my ‘hate’ list until recently with the Waterview Tunnel opening, though it is still a frustration.  I am wary of the changes currently happening at the Mt Albert shops and on New North Rd.  Nice wide pavements are fine but the resulting narrowed road with reduced car parks and narrow cycle lanes seems daft unless I’ve missed something. The new Four Kauris Medical Centre location is excellent!  We’ve been well catered by cafes for many years but the recent discovery of Thai restaurants serving good quality food is a real bonus!

If money was no object, what would you spend it on to make Mt Albert a better place?
I would build a brand new music auditorium, sound proof, with great acoustics, proper stage lighting and sound system. An expert such as Mt Albert’s Sir Harold Marshall would be commissioned to design the performance space. There would be different sized venues to suit different events with sound recording capabilities. It would be comfortable and enticing to audiences with proper facilities for catering, licensed to serve alcohol, and with ample, easy parking. There would be the option of event marketing and ticketing management or the performers taking care of both. In a perfect world I’d make the venue freely available or at least affordable for local artists to make use of the space, not just restricted to high profile acts.