Rat-free Mt Albert on the way

A keen group of local volunteers want rat traps in more Mt Albert back yards to support their push to make the mountain rat free.

The Owairaka Ratbaggers group has been working to rid the Mt Albert/Owairaka Domain of the pesky predators since August. They are now looking to ramp up the project by encouraging more locals to trap rats in their own back yards.

“We’ve started with the jewel in the crown and tackled rats on Owairaka Domain, jointly with the Tupuna Maunga Authority,” says Stefan Rueegg, one of the 15 ‘ratbaggers’ who all live within a couple of minutes of the mountain.

“This is coming along nicely and should help our native birds thrive, but we are now looking to expand our scope down the slopes of the mountain.” 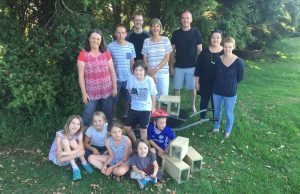 The aim of the group (pictured) is to establish a network of traps – one in at least every fifth property – to provide a halo around Owairaka to prevent rats invading from surrounding areas. The area in their sights stretches from Oakley Creek in the south and west, to the rail tracks in the north and Mt Albert Rd in the east.

“If we can achieve this, it will connect us with the great work done by other groups along Te Auaunga/Oakley Creek and Meola Creek,” says Stefan. “One person trapping makes little difference to the rat population but a community working together can be a powerful force.”

The group have just received a $2500 grant from the Albert Eden Local Board to help with their goal. This means they can supply traps to residents in return for a commitment to keep them set during their trapping months of August, November, January and April. These periods, known in the trade as ANJA months, are strategically important times in the rat life cycle and will coincide with baiting in the domain.

The group’s vision is a predator-free neighbourhood so Owairaka can be a stepping stone for native birds flying between the Waitakere Ranges and the Hauraki Gulf’s pest-free islands.

The ratbaggers maintain just over 40 bait stations on the domain, and hot spots are backed up between “pulses” (the setting of baits in the stations) with traps.

“Poison is the most effective method to knock the population on its head, and we have worked with the Tupuna Maunga Authority to develop a way to do this safely,” says Stefan. “A similar group is using the same approach at Big King Reserve.”

The group uses poisons already commonly available over the counter. The solid bait blocks are secured inside locked boxes that cannot be accessed by children or dogs.

The group were proactive in reaching out to dog walkers, who were pleased that the rat population was being targeted and gave valuable information as to where their dogs found rats.

Those wanting more information on trapping on their property, and to join the group, can visit the website or email rats@owairaka.nz.