The plan to virtually double the size of St Lukes mall is grinding towards a start, though it may be 2019 before work finally begins.

Mall company executives are still refining and adjusting the St Lukes masterplan and have been meeting with Auckland Council planners. But any announcement on the final form and a start date is still months away.

The signs are, though, that the mall owners may seek permission to further change the development plan – and, if recent history is anything to go by, local residents will have no say about that.

Scentre Group, which owns and manages the Westfield-branded malls in New Zealand, initially expected work at St Lukes to begin by perhaps mid-next year. But that tentative timetable, suggested by the company CEO in February 2016, now seems optimistic.

Scentre owns the malls with a Singaporean government investment fund and CEO Peter Allen said then the company was committed to New Zealand. 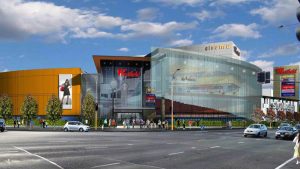 He told the Herald the plan was to develop three Auckland malls – 277 Broadway Newmarket, St Lukes and Albany. Broadway would be first, followed a year or 18 months later by St Lukes.

Work on the 277 project has started and a local businessman told Mt Albert Inc that all the businesses in the legacy buildings have closed. Staff at Farmers are telling customers the shop will be back at the same site in two years.

The 277 timeline isn’t too far away from that outlined by Peter Allen, suggesting that, while St Lukes has probably been pushed further out, a start there could be made early-mid 2019.

The redevelopment, if it goes ahead to its original scale, will turn the mall floor space from its present 4ha to 7.7ha – spreading the mall and parking zones out over the present rear open carpark through the adjacent houses that the company has bought and will demolish.

Where will library go?

The Mt Albert Library may be caught up in the development, with the company apparently keen to buy the council land it sits on. But there has been no word on whether it will be relocated and, if so, where it will go.

The original resource consent for the redevelopment was granted by the council in 2011 – to strong opposition from local groups concerned about issues like traffic, noise, parking and loss of trees and privacy.

Already St Lukes Rd from the mall down to the motorway is among the busiest in Auckland, with crawling peak-hour traffic and a nightmare in big shopping days like the Christmas rush.

The development in the Wagener Pl area across from the mall – with big retailer Chemist Warehouse joining the other operators and sure to add to the traffic – further compounds the issue.

Locals wondering about the sort of crush a doubled mall will bring were locked out of challenging subsequent consent amendments when the council decided it was “unlikely further information or debate from possible submitters could improve the quality of decision-making”.

The expansion pushes the mall uncomfortably close to streets like Aroha Ave and Exeter St, but homeowners there had no say in the last plan revise – and it seems unlikely their voice will be heard if another amendment goes before the council.

While the way forward is unclear at the moment, it appears unlikely any further amendments to the masterplan will be dealt with by the council in open session.

Mt Albert Inc put questions to council planners through ward councillor Cathy Casey, and the response was: “We are advised that Scentre have recently had a pre-application meeting with the Premium Team in resource consents on a revised development proposal. This may be considered as a variation to their current approved resource consent, or it may be considered as a fresh application. No determination has been made in respect of the consenting process.”

Scentre’s New Zealand development executive David Drew could not give any precise timing on the St Lukes project and said it would be “some months away” before anything could be revealed. With Christmas in sight, that seems to suggest an announcement will not come until well into 2018.

He would not be drawn on the shape of the proposal, except to say that the masterplan – as with all mall masterplans – was “constantly evolving” to meet customer demands. No decision had been made on whether a new consent would be required.