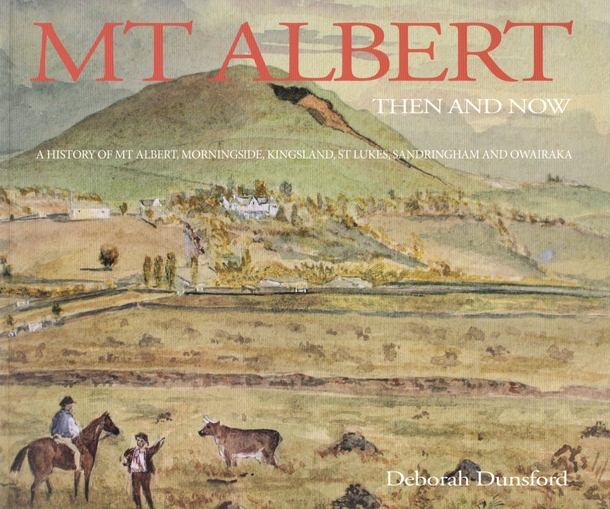 The MT ALBERT HISTORICAL SOCIETY is one of our most respected local organisations, with a mission to “protect, preserve and educate on all matters historical in and relating to Mt Albert”.

The society holds regular gatherings with guest speakers, local walking tours and visits to places of interest, and publishes regular newsletters focusing on heritage aspects. You can read them and find out more (including how to join the society) from the society’s website

The society’s most recent achievement has been the publication of Mt Albert Then and Now, written by historian Deborah Dunsford. It is a fine book, lavishly illustrated (available through the society website), and the following excerpts will give an idea of the depth of research and quality of the content

Wairaka, heroine of her time

… Today, Mt Albert’s popular Maori name is Owairaka, or the place of Wairaka, who was the daughter of Toroa, the Mataatua canoe captain and Ngati Awa chief. Wairaka was celebrated in her own right for saving the women and children of the Mataatua canoe while the men explored the Bay of Plenty shore. As the canoe drifted off the coastline, Wairaka took up the role of the men and paddled back to safety. Whakatane – to make myself as a man – was named for her. Later, she came to Tamaki-makau-rau to avoid an unwanted marriage and established her pa at Owairaka. She later returned to Whakatane, although some of her tribe remained at Owairaka. 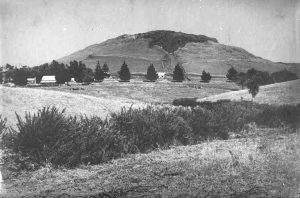 From the 1600s Tamaki-makau-rau was closely settled by groups affiliated with the Tainui tribe and known collectively as Waiohua. This blending of peoples under Waiohua leaders Hua and then Kiwi Tamaki led to a settled and prosperous time. The extensive pa and fertile gardens at Maungawhau, Remuera, Te Tatua, Mangere and Maungakiekie were renowned and heavily populated. Never as illustrious as these rich pa, Owairaka was nevertheless terraced and cultivated. Its attraction as the most westerly hill pa on the isthmus was qualified by the areas of very stony ground around it. However, during the Waiohua era from 1700 to 1750, it was part of the wider network of hill pa and villages on the isthmus with occupants cultivating crops on a three-year cycle. John Guise Mitford’s painting of the hill in 1845 shows a landscape sharply defined by terracing. Unfortunately, heavy-handed quarrying for railway ballast and roading metal has removed the terraced top of Owairaka entirely and much archaeological evidence about day-to-day life went with it.

… During 1842, on paper at least, the Auckland hinterland expanded along the Waitemata Harbour towards the Tamaki River and over the Karangahape ridge to Mt Eden and Mt Albert. In reality, suburban settlement was very slow. On 1 February 1842, 37 Mt Eden sections, most over 100 acres, were auctioned at one pound per acre; over half received no offer. Thirteen small Mt Eden and Mt Albert farms of between 20 and 47 acres were auctioned in August 1842 and twelve were still on the market three months later. 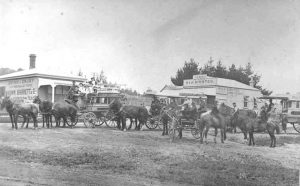 Roads were the foundation of colonial development and the main arterial routes were funded by Government. Their construction was accompanied by settler complaints about routes and slow progress. In 1847 the New Zealander panned the paper route running westwards between Mt Eden and Mt Albert (today’s New North and Sandringham roads) and gave a strong sense of the rugged landscape. The planned road traversed the scoria field north-west of Mt Eden which resembled ‘what the sea would be if petrified suddenly during a storm’, before crossing Cabbage Tree Swamp (the northern section of Sandringham Rd) which was ‘a lake for five months of the year’. The route then plunged through a series of deep gullies. The writer concluded that ‘the road pretends to open up a fine and extensive district very close to town, but is in reality quite unapproachable’. It’s not surprising Mt Albert had just a handful of residents in the 1840s.

The impact of Allan Kerr Taylor

… Closer to the mountain, where an extra mile meant cheaper land, Robert Hunt bought 60 acres around today’s Ferndale for 180 pound in 1845. Auckland shopkeeper, farmer and land speculator, Thomas Henry, had purchased six adjacent lots on the lower north-eastern slopes of Mt Albert in 1844 and offered them for sale in April 1849. 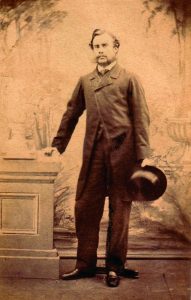 The potential to turn Henry’s 293 acres into a ‘splendid farm’ with plenty of water and scoria for building and fences was recognised by a go-ahead young man newly arrived from Scotland. Allan Kerr Taylor was 16 years old, the fourth son of Lieutenant-Colonel William and Barbara Taylor, and had capital to invest. William Taylor’s military career was spent in India although his children were educated in Edinburgh. Taylor encouraged his sons to emigrate to New Zealand and funded their purchases of land. His two eldest sons, William Innes and Richard James, arrived in Auckland in 1842 and 1846; by 1849 they had acquired three substantial estates at Glen Innes, Glendowie and Glen Orchard (St Heliers).

Arriving in Auckland in January 1849, the young Allan Kerr Taylor wasted no time and purchased Thomas Henry’s six Mt Albert allotments for 450 pounds. He did not settle immediately at Mt Albert but sailed for the adventure of the gold rush city of San Francisco the following year.

Alberton House – centre of the community

… Clubs and societies were often linked to church affiliations and led to different styles of socialising. The Mt Albert Mutual Improvement Society was established in 1870 with fourteen members of the Mt Albert Methodist Church. It aimed to better the district’s young men through lectures and classes while society meetings allowed whole families to meet and socialise in a respectable, moral setting. 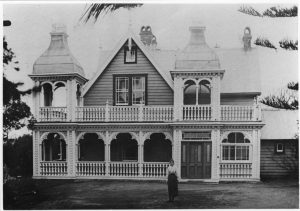 The Kerr Taylor family and their substantial Alberton estate added a shine to Mt Albert’s early social life. The widowed Kerr Taylor had married 18-year-old Sophia Louisa Davis in June 1865; ten children were born over the following 23 years. During the early 1870s, architect Matthew Henderson transformed their farmhouse into a country seat rich with Indian influences. The Kerr Taylors hosted the first ever County (or Riding) Ball on 20 September 1877. The original venue of the Whau Public Hall was scotched because of the objections of some ratepayers, probably disapproving of dancing and alcohol, but 250 people danced the night away in a packed Alberton barn instead. Alberton events were grand and formal occasions; as a very little boy, Fred Woodward would be dressed up in livery to open the carriage doors for Albert guests. The Kerr Taylors staged an annual party for the children of St Luke’s Sunday School and regularly hosted meetings of the Pakuranga Hunt Club. The family was involved in the high side of Auckland’s social life. Allan helped organise the 1883 Citizens’ Ball for the Governor and Lady Jervois: ‘the most brilliant which has ever taken place in Auckland’, bragged the Herald.

Tragedy on the tram

… Mt Albert residents enjoyed surprisingly easy access to the city. From April 1903, train and bus services were supplemented by the electric tram as far as Kingsland. The district’s wealthy families maintained horses and carriages; Andrew Caughey travelled to Queen St by horse-drawn trap. Some of Mt Albert’s young women were also out and about. Miss Hooper, the daughter of Dr Hooper of St Luke’s Church, and her friends, were driving home from Auckland one afternoon when their carriage shaft broke and they were thrown out although unharmed. More seriously, Mrs Elizabeth Battley was killed when her buggy was hit by a train at Kingsland on 24 December 1897. 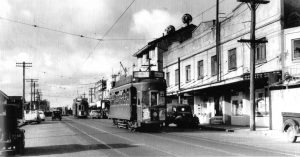 An even more serious collision occurred late on Christmas Eve 1903, killing three and injuring 100. A packed double-decker tram was travelling up New North Rd. It moved into a loop to await another tram, but the brakes would not take and the car slid backwards. The motorman and conductor tried to apply the rear brakes but the car ‘gathered an awful speed down the incline’. It rounded the corner near George St where, 100 yards below, another tram approached from Kingsland. A collision was unavoidable and gruesome, with the lower car piercing the out-of-control double-decker for a quarter of its length. Desperate scenes followed as people were pulled from carriages. News of the disaster swept the city, and crowds came to discover news of their friends. The Coroner’s inquest found the brakes were satisfactory but the training of the motormen and conductors was inadequate and should be improved.

… Mt Albert social life in the 1950s was still strongly shaped by nonconformist attitudes about what was appropriate public behaviour, underpinned by objections to alcohol and its misuse. Ministers from all the churches worked together over many decades to ensure Mt Albert, which was part of the Roskill Licensing District, maintained its no-alcohol licence status. They succeeded with their mission until 1999 when the area voted for restoration. Councillors were highly sensitive to this conservative attitude and were cautious when approving Sunday social activities. Religious and education activities were acceptable; permits for events deemed frivolous – including dancing – were refused. 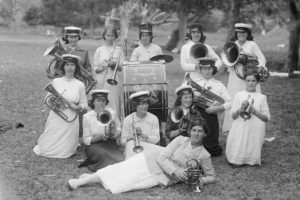 In January 1953, the Council declined a war memorial fundraising suggestion to conduct a talent quest in the Sandringham Theatre on several Sunday evenings. Similarly, when the Lodge Riding School based at 115 Richardson Rd organised a fundraising gymkhana to be followed by a public dance and barbecue on a Sunday evening, the gymkhana got the go-ahead but not the dance and barbecue. However, attitudes were starting to change. The Council was evenly split over the Riding School’s application which was only declined on the Mayor’s casting vote. The depth of conservative attitudes was on display in the vigorous, if unsuccessful, opposition to an international rugby match between North Island Maori and a Barbarians team played at Eden Park on Sunday, 19 June 1955.