Carrington Rd will be widened to cope with the extra traffic flowing from the Unitec development,and the community waits with interest to see the results of a full integrated traffic assessment.

The vast Unitec project will not be a ride in the park for developers and the final size and shape may come down to three key little letters: ITA.

Traffic is of course a huge local – and city-wide – issue and the developers will need to clear Auckland Council’s hurdles with an integrated traffic assessment (ITA) before any subdivision or building consents are granted.

The process is detailed and demanding and will have a direct bearing on whether the development can hit 4000 homes or be reduced to, say, 3000.

The council has been working closely with the Government, but it has its own rules to follow and the pressure will be on Auckland Transport to not sign off on an initial ITA until it is satisfied the traffic flows around the development can be managed or mitigated.

The developers will be required to pay for widened roads (Carrington Rd will be first up, though that will probably be a shared liability because it needs the work anyhow), re-shaped intersections, calming devices and other steps the council considers necessary to cope with the extra traffic – and may limit the size of the development if experts believe it’s the only way to prevent the choking of local roads.

That sort of process should give local people confidence that council officers will look after their interests.

But past history on this land doesn’t inspire such confidence, right from the Unitary Plan hearings where the Wairaka Precinct was born, allowing for a medium-high density development of apartments and terraced housing.

Under the draft plan, the Unitec-owned land was zoned for education. The institution requested a change at the subsequent formal hearings to allow it to consolidate the education facilities into part of the land, seeking housing and mixed-use zones for the rest. 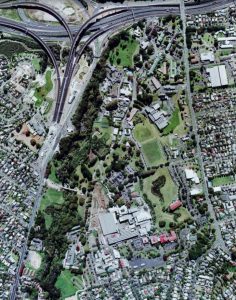 It seemed logical that the hearing commissioners would require a full ITA before deciding whether the land zone should be changed, given that it covered the biggest block anywhere near the central city that could be developed for housing.

How could 55ha of land 10 minutes’ drive from Queen St be rezoned high density housing without regard to the traffic issues it would present?

The hearings panel could have decided to leave the education zone in place, which would have forced Unitec to prepare an ITA to justify any development – and then apply for a private plan change.

But the hearing commissioners – weighed down with a thousand balls in the air, a pressing deadline and the overall demand for more housing – went the Unitec way, against the wishes of the Mt Albert Residents’ Association (MARA), which argued that a full ITA was vital to measure the likely impact of the planned development.

However, the commissioners didn’t grant the new zoning totally on a plate to Unitec, ruling that no subdivision on the land could proceed without an ITA. In other words, before being granted any consent, the developer had to present a full, professionally-audited and challenged assessment of likely traffic issues and how they could be overcome – and continually update it.

For the residents’ association it was hardly the perfect result, and it got through relatively unnoticed elsewhere along with the vast weight of adjustments to the draft plan.

But it at least meant local people could discover, before the first bulldozer arrived, what had to be done to alleviate traffic congestion and flow.

Well, that’s what everyone thought – until last November when a duty council planning commissioner pushed the requirement aside and granted Ngati Whatua’s development company the right to subdivide its land in the precinct adjacent to Laurel St… without an ITA.

Mt Albert town planner Craig Magee, who helped lead the MARA challenge at the hearings, sums up the whole process: “Neither Unitec nor the council were seemingly interested in sorting out traffic issues prior to approving it all. Unitec wanted the money and unfortunately the council abdicated their responsibilities, probably because they did not want to be seen to be standing in the way of so much housing potential.”

And when the commissioners’ requirement for a pre-subdivision ITA was tested, everything turned to custard.

Even Unitec seemed surprised by the Ngati Whatua “success”, which was challenged by MARA. But the council kept its head down and, five months later, the iwi development company has had nothing to say. Which seems a strange way of respecting your neighbours.

Unitec’s own long-awaited ITA has never been revealed publicly and, before the Government deal, locals had no idea what issues it was confronting, what results its surveys revealed and what solutions were being suggested.

After various rounds of discussion with Auckland Transport, the ITA was still apparently being worked on when the Labour coalition was formed and decided the land was well-suited to its programme to provide more houses, quickly and cheaply.

Presumably, the Government’s agents will now add their own substance to the report for the council’s consideration – and the community expectation is surely that the council must not yield or cut corners to the state muscle.

Town planner Magee had another view when ward councillor Cathy Casey noted on Facebook that she was “very optimistic” at a “showcase development”. It was clear, she said, “they are building a community not a housing development”.

Mr Magee declared: “I have no confidence in the council or Unitec given what has happened thus far. It would need to rely entirely on the Government to do this in a way that appropriately addresses the big issues that have hung over the development of this land.

“Unitec spent two years avoiding doing requested assessments on all matters, including traffic. The council and hearings panel capitulated at the Unitary Plan hearings and let them get away with it.”

Mr Magee says ITAs are dealt with behind closed doors and this one will be “too late to do anything meaningful”.

He is scathing about Unitec’s approach: “With their repeated actions through the Unitary Plan process (starting with their submission to completely change the Precinct to enable 3000-plus dwellings without telling anyone in the community, let alone their adjoining neighbours) Unitec have made it crystal clear that the community is simply a problem to overcome/get around.

“The community has been excluded from everything meaningful, despite members spending hundreds of hours of their own time trying to get answers and trying to get Unitec to carry out the professional assessments required to justify their plans. They continually refused, for way longer than a year.”

Mr Magee thinks there is more hope for better outcomes with the current Government in charge of developing the land, rather than private developers.

“However, the Government has inherited development potential that was enabled by a substandard process. So it’s somewhat of a poisoned chalice.

“There is always hope of course, but the number of dwellings has gone from 3000 to potentially 4000 and yet we have the same significant access constraints.”

Specifically, Mr Magee says there needs to be traffic calming devices to “make it a waste of time for people in the northern part of precinct to rat-run down through the existing southern streets, which will be opened up by the new Precinct roading”.

MARA co-chair Sir Harold Marshall took advantage of an invitation to the formal announcement to stress the group’s position to the Government and the council:

Sir Harold said MARA was on the same page as Government and the city, but “now to make sure it works where the rubber hits the road!”

Fellow co-chair Wayne Pearson welcomed the development of new housing to give Kiwis the chance to become home-owners. But the community wanted to be consulted – “the Government can build and walk away to the next project; we are left with any impacts that may stem from the development”.

“Community interests should be taken into account by developers and the Government,” said Mr Pearson. “We should not be cast aside as having no seat at the table.”

Apart from the ITA and traffic, the community wanted answers on issues like how schools will cope, what impact the commercial part of the development will have on the village shops and “will it spell the end for the centre of our community even having just undergone an upgrade”.

But, at this stage, traffic and the ITA stand out as the pressing issues, along with density, design, carparking and open space.

The ITA process, vital in a growing city with huge traffic issues, has been tainted through the Unitec project. Mt Albert will hope the Government restores some credibility to proceedings and gives it – and the people – the respect they deserve.

How the Wairaka Precinct was created