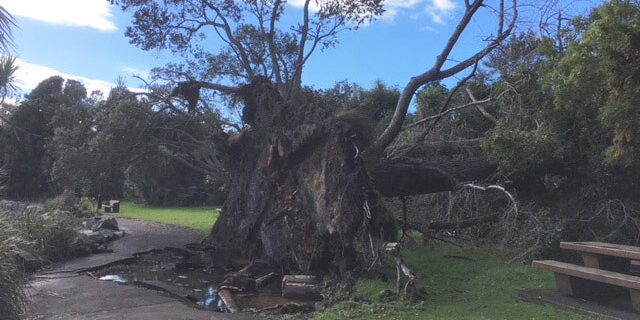 An important archaeological find beneath a giant poplar tree uprooted in the wild April storm will keep the circular path around Western Springs Reserve lake fenced off for some weeks yet.

The poplar crashed to the ground at the height of the storm on April 10, taking a couple of smaller trees with it, at the MOTAT end of the lake.

The roots destroyed half a short section of the bitumen footpath and Auckland Council staff installed “do not pass” safety fences 30m or so on either side, ending the continuous one-way pleasant stroll around the lake. 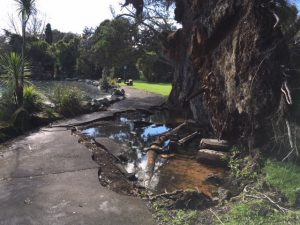 That was over nine weeks ago, leading to this question from Mt Albert Inc: How long does it take to get rid of a fallen tree spoiling a noted Auckland park?

And that’s when we learnt things aren’t always as straightforward as they seem. Chainsaws have to bide their time when the city’s heritage is involved.

The fallen tree exposed the remains of the original water intake to the 1870s pump-house at MOTAT and initial investigation uncovered brick foundations, possible elements of a sluice and a cast-iron pipe.

In terms of archaeological discovery, it may not quite rate with moa bones and early Maori treasures. But the find is an important one and the council hopes to be able to conserve the remains for park users to view and learn about the history of the city’s early water supply system.

Agnes McCormack, the council’s head of operational management and maintenance, says the remains are being investigated and recorded by consultant archaeologists and a number of “conservation options” are being explored.

Any invasive works on the remains, including removal of the fallen tree, require resource consent as the site is scheduled as a historic heritage place. Because the remains pre-date 1900, an archaeological authority from Heritage New Zealand is also being sought.

At this stage it is uncertain when the tree will be removed, the footpath repaired and the fences taken away.

But with the serious archaeological work only starting this week, it will be some time yet before locals and tourists can negotiate the lake trail… and stop to read about Auckland’s 19th century water system.