Why we must act before our waterways die

Meola Creek in flood in 2008 The swollen creek in heavy rain carries a nasty soup of heavy metal and sewage – and most of it ends up in the Waitemata Harbour. Flooding pictures this page: STEPS. Picture on ‘Big issues’ opening page is of Oakley Creek in flood, taken by Wendy John.

When it rains, the water slips from roofs, roads and land and disappears down drains, doesn’t it? Everything’s fine as it soaks into the ground or ends up in creeks and out into the harbour. What’s wrong with that – it’s clean water isn’t it?

Well, no it’s not. The stormwater dumped into our creeks and harbours is one of the city’s greatest problems and Mt Albert is in the thick of it. Waititiko Meola Creek has its source in this suburb and is the biggest single contributor to the pollution of the Waitemata Harbour, which has about 2.2 million cubic metres of sewage and metal-laden stormwater dumped into it each year. 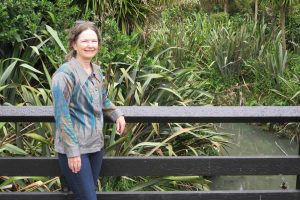 Elizabeth Walker (pictured), chair of the St Lukes Environmental Protection Society (STEPS) argues here that we need to stand up and persuade Auckland Council to start treating stormwater with the seriousness it is giving to transport.

STEPS, with groups like Manukau Harbour Restoration Society and Friends of Oakley Creek Te Auanga, has been battling waste and stormwater issues for years. STEPS was founded in 2005 by Pat Prescott and a group of local residents who were frustrated by constant sewer overflows from inadequate sewage and stormwater systems, while ongoing development around St Lukes added to the volumes.

Elizabeth says we must be prepared to pay for the omissions of the past in dealing with the stormwater problems of the present and future.

If we don’t take a stand and our civic leaders and bureaucrats decide to fund only transport projects, then our children, and their children, may find that a day at the beach becomes a foreign concept in Auckland.

[UPDATE, November 29: Mayor Phil Goff’s 10-year budget provides for a targeted rate to improve water quality – costing about $1.70 a week for an average household. Most of that will go toward speeding up the $1b-plus Central Interceptor pipeline through Mt Albert to the Mangere wastewater treatment plant, reducing overflows into the Waitemata Harbour within 10 years – 20 years earlier than planned.

In an opinion piece for the Herald published on January 3, Mr Goff wrote: “With the right level of investment we can clean up our beaches and harbours within a decade, reducing wastewater overflows by as much as 80 – 90 per cent.

“One of our biggest problems is on our Western Isthmus where over 70 outfalls overflow into the Waitemata between 25 and 60 times a year. To solve that we have to separate stormwater from wastewater where it is practical to do so and build a major new central wastewater interceptor.

“This will also allow more intensive housing and help future proof Auckland. That’s not cheap. It will cost around $1 billion but you can’t keep growing a city by 50,000 extra residents a year and not invest in infrastructure to match that growth.

Stormwater is a part of urban living. While rainfall in nature is dealt with by wetlands, rivers and natural water features, hard urban surfaces collect rainfall which must be disposed of.

So how does Auckland deal with it?

What exactly is the “Stormwater Problem”?

The main problems are: 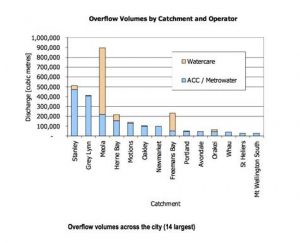 The severity of the problem in Meola Creek, Mt Albert, is shown here in this 2010 graph from the council:

Meola Creek carries about  one million cubic metres per year of sewage and metal-laden stormwater  into Waitemata Harbour.

In the future, the Unitary Plan will effectively raise impervious surfaces from 42% to 62%. Our harbours simply cannot cope.

What is happening now?

The council has a visual simulation model which shows what happens now after a sewerage overflow: the sewage sits in the water, tides go in and out… and it remains. It can take several days to flush out to the open sea and, while it sits in concentrated levels, is dangerous to both human health and to wildlife.

Link to the “Safe Swim” program which now alerts people to the danger, with the council forecasting and publishing the quality of beach water. 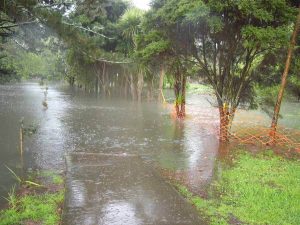 Who would benefit from clean Auckland harbours?

Yachties, swimmers, families and citizens generally would not have to deal with the sanitary items and coliform counts that regularly show up on Auckland beaches, parks and in the water.  So most Aucklanders and many other New Zealanders would gain from treating and separating stormwater.

What do we want?

Auckland stormwater impacts are heritage problems no one wants to pass to future generations. We believe stormwater can no longer be a buried problem.

The council has under-invested in handling stormwater, especially when it comes to roads, combined sewers and soakage.

Clean water infrastructure must receive the same planning, funding and attention in the Auckland plan that is being given to transport.

The old stormwater infrastructure gaps pose major health risks to humans and the environment, and people living on the Auckland isthmus deserve similar standards to what is being built as Auckland expands into those new “green fields”.

We want the council to start on stormwater treatment and wetland pilots immediately – and the STEPS wetland in Mt Albert’s Roy Clements Treeway is an example of how much nature can do to treat water and recharge the aquifer if the council can just slow the flow.

What is the plan?

Watercare plans a central interceptor – a wastewater tunnel that will run between Western Springs and the Mangere Wastewater Treatment Plant. It will run underground for 13km, will cost around $1 billion and is intended to:

For more information and a video,  follow this link .

How will the Central Interceptor affect Mt Albert?

In Mt Albert there will be several vertical shafts built up to 50m below ground, to connect with the interceptor tunnel running underneath the thick layer of basalt lava rock.

One shaft will be in the grounds of Plant and Food, behind Haverstock Rd.  Another will be in the middle of the Roy Clements Treeway where all the trees near St Lukes Megacentre will be cleared to allow the work to take place starting in 2021. The number of floods on Meola will reduce as a result.

But is that it? What about stormwater?

Additional work is needed to treat stormwater, and the council is yet to announce details. It may include some sewer separation and some local treatment to reduce the volumes of stormwater flowing through the sewers. Stormwater treatment needs to occur as near as possible to where the rain falls.

In October 2017 the council’s environment and community committee voted to consider the proposed stormwater infrastructure proposal for the western isthmus as part of the long-term plan consultation in February next year. 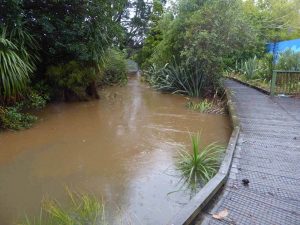 But there is a lot of water to go under the bridge before a decision is made and a commitment is given. Stormwater needs powerful advocacy.

So isn’t the issue pretty clear?

How big is the bill?

If Auckland Council cannot remove the large volumes of stormwater going to the Mangere treatment plant then Aucklanders may well have to pay Watercare Services to build more waste treatment capacity. That would cost billions.

How can it be funded?

Auckland politicians have mentioned a “targeted water quality charge” – and the benefits of that are clear: it can only be spent on stormwater; it cannot go to stadiums, the America’s Cup and lifestyle pursuits.

Aucklanders who enjoy beaches and water recreation… urban Aucklanders as the main road users (since heavy metals and oil and the largest amount of stormwater come from roads)…  Watercare waste treatment customers.

A government which cares about the health of people in NZ’s largest city – or about clean water, or about safe housing intensification – would also consider special purpose vehicles (SPVs) – like government bonds for urban NZ to catch up with its water infrastructure.

Let’s remember that 86% of New Zealanders live in cities and towns… and no one wants the next generation to be facing such a dreadful situation.

The Auckland Plan refresh must contain aspirations and plans for water infrastructure, similar to those for transport. And the long-term plan must include “ring fenced” water funding for stormwater improvements on the Auckland isthmus.

Perhaps most of all, though, we need Aucklanders to stand up and say this issue is hugely important and needs to be sorted before it’s too late.

Things you can do, steps you can take: