Auckland Transport has revealed its plan to make the Asquith Ave-New North Rd intersection safer for motorists – and it doesn’t feature traffic lights, roundabouts or a new banned right-hand turn.

The intersection – location of scores of dings, scrapes and more-serious accidents over the years, and dubbed “prang alley” by Mt Albert Inc – will be getting a facelift once Auckland Transport (AT) receives feedback on its proposal to tackle the rising accident rate.

Earlier informal feedback on this website and Facebook suggested a range of measures to cope with the risks of turning right out of Asquith across the city flow from the village and into the western flow along New North Rd. 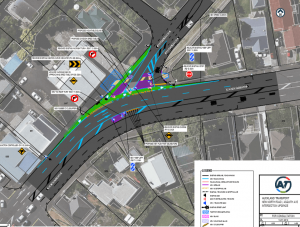 Sticking in lights or a roundabout and banning right-hand turns from Asquith altogether were the most popular suggestions, though there were a few people who thought it best to leave it all alone (the drivers are the problem, not the intersection, was their theory).

Now (as shown in the map), AT has come up with a way to deal with the inherent danger of traffic coming down from the village meeting other vehicles swinging in their path from Asquith Ave (often impatient drivers trying to squeeze their way into the western flow).

AT says the proposal was selected because “we expect it will provide the greatest possible benefits to the overall safety of road users”.

At the centre of the plan – soon to be open for public feedback – is the elimination of the small “no right turn” island in New North Rd, directly in front of the Asquith Ave entrance. (The latest crash has done part of AT’s work for them: some of the sign was obliterated last month, but the concrete pad remains.)

The council agency says its studies show that the current position of the raised traffic island on New North Rd (as shown at centre-right in the second Google map) creates an obstacle for vehicles turning right out of Asquith Ave. 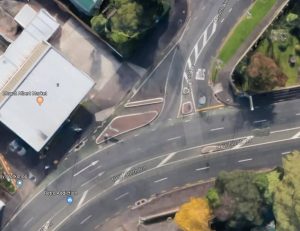 The proposed changes will require drivers to take a more direct line out of Asquith, reducing the time they are exposed to oncoming traffic.

The no-right-turn (to Asquith) sign in New North Rd will be pushed further west, with a string of “flexi post delineators” (toughened polyurethane stands designed to withstand plenty of glancing blows) before it to thwart rule-breakers and better separate traffic flows on the corner. (This link shows examples of the delineators)

At the moment, traffic turning right out of Asquith Ave takes a diagonal route to the marked refuge lane, entering on the village side of the no-right-turn island before merging with the traffic heading up to Carrington Rd.

Under the new plan, vehicles will come out a little straighter, joining the western flow just before the line of delineators.

The proposal also creates a more natural turn into Asquith Ave for traffic from the village (rather than the present reasonably sharp left-turn, which forces traffic to slow but has caused problems with vehicles travelling too quickly for the manoeuvre).

It changes the shape and size of the raised islands at the entrance to Asquith Ave, allowing for a slightly more direct way into the street for vehicles coming from the village (with the bonus of a more comfortable pedestrian refuge), and introduces a speed table (with warning signs) right at the beginning, to slow traffic.

A “speed cushion” (similar to those built in Alberton Ave last year) will also be installed immediately before the intersection to slow west-bound vehicles in Asquith Ave.

A rubber buffer will mark the cycle lane that runs across the intersection, though that buffer will not extend across entry and exit lanes to and from Asquith Ave. A range of new signs will also be installed.

The proposal is now open for public feedback and, when that closes on February 21, AT will spend time analysing the submissions and considering changes before confirming the detail and starting the project.

If you are unable to access the website and have questions or need further information, ring (09) 448 7265, quoting the reference number RTV-130.

AT is sending letters to residents living around the intersection, but the feedback is open to all local people. It has explained why the proposal has been favoured over some of the local suggestions and makes these observations in its letter to locals:

Traffic lights: “It is not sound engineering practice to use traffic lights at multiple intersections within a relatively short distance of one another. This can lead to confusion for drivers along with creating congestion and delays.”

Construction of a roundabout: “In standard engineering practice, roundabouts are typically best suited for intersections where traffic volume on each leg is relatively even. Because New North Rd experiences a significantly higher traffic volume than Asquith Ave, a steady flow of traffic from each leg of New North Rd would likely make it difficult for traffic from Asquith Ave.”