Is Mt Albert Grammar too big? Should its enrolment zone be amended? How can the school retain its cultural diversity as its catchment changes? Do we need a new secondary school in the centre-west? Mt Albert Inc editor Bruce Morris looks for answers

In three to four years, when its new farm centre is open, Mt Albert Grammar could be the biggest school in the country, with a roll of probably 3300 to 3400.

Already, with just over 3000 students, it is in second place – behind Rangitoto College in Mairangi Bay, which has 3200 teenagers on its books.

Add in 200 teachers and 100 other staff and you can see that MAGS is already a very big unit.

It’s crazy, just too big, some people might say of the school’s inexorable ability to pile in students, with the roll up about 120 per cent since girls were first admitted in 2000. Ban out-of-zoners, they say, and maybe even pull in the enrolment zone to get it back under 3000. 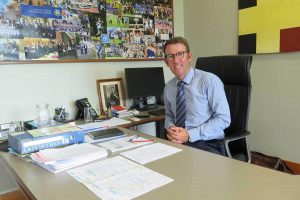 MAGS headmaster Patrick Drumm (pictured) has heard it all. But he has no magic wand.

To start with, the school has effectively already turned off the out-of-zone tap, though it will take four or five years for the full impact to be felt.

In years past, around 20 per cent of the Mt Albert Grammar roll came from outside its zone. From this year, only siblings of existing pupils will be accepted – amounting to about 60 students in 2018.

A major “problem” is that the school’s reputation continues to grow.

In-zone parents who earlier may have sent their children to a private school are very happy with what they have just down the road (an extensive survey last year showed 86 per cent of parents were either satisfied or very satisfied with the quality of education and their child’s “happiness”). As well, the in-zone population is growing as infill housing and the Unitary Plan do their thing.

The ambitious plan to create a high-quality primary-industries learning institution – an “experience centre” on the school farm – and have it running by 2022 is a complication; it will add around 350 students to the present 150 studying agricultural science at MAGS, and all of them are expected to come from outside the existing zone.

The Ministry of Education is considering the proposal as a special case and is unlikely to stand in the way of a progressive answer to the challenge of recruiting the thousands of primary-industries workers New Zealand will need over the coming years. 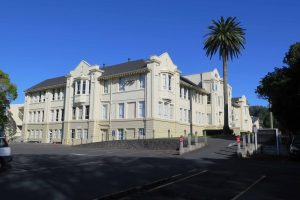 MAGS has embarked on a fundraising drive for the further $10m or so it wants to build the centre, but the ministry will need to pay its share from its capital budget to accommodate out-of-zoners. With so many under-pressure schools looking for a share of the limited cake, it has not been a straightforward path.

However, some good news: the ministry has told Mt Albert Inc that by the time the programme is up and running, additional classrooms will have been provided. “The board will be able to cater for the enrolments into this programme.”

If it all works out, Mt Albert Grammar’s roll will flat-line at around 3000 over the next four years or so – and then move up to the 3300-3400 mark when the primary-industries students come across town (or elsewhere in the world) for the farm-centre education that will give them jobs in an in-demand sector.

It’s an exciting time for the school and its leadership, but isn’t that roll getting too big? With the rising local population, does the zone need to be pulled in?

Already MAGS is preparing to persuade the ministry to allow it to amend its zone to exclude the Unitec block, where the Government is planning a new town of 3000 to 4000 homes. There’s a process to go through, but approval seems a mere formality, with the ministry already deciding Unitec-land students can go to Avondale College when the town is built.

Excluding Unitec will have no immediate effect on Mt Albert Grammar because, at the moment, no one is living there, and contracting the zone elsewhere isn’t on anyone’s agenda.

Patrick Drumm is certainly no advocate for shrinking the zone boundaries beyond the Unitec moves.

“The issue for the ministry is that our neighbouring schools are full, so if you shrink the zone, where do they go?” he said in an interview before the Government played its hand over the Unitec land. “You can’t shrink it towards [Auckland] Grammar or Epsom Girls’ because they are bursting at the seams, and Western Springs is at capacity. Where are the students going to go?”

He asks why there is no plan to build a new school in the Unitec block, and notes: “Building new schools and acquiring land is not a cheap process and they are under immense pressure to manage what they have.”

Mr Drumm says the expectations of parents who send their children to MAGS are the same as those who might choose a school with just a few hundred students.

“Auckland schools are just a function of the Auckland infrastructure issues: we are no different to transport, housing and so on. This is the nature of Auckland. We can argue about Government policy and that they should have built another school at Unitec or Alexandra Park, but it is what it is for us.

“Really, the measure of whether a school is too big or not is when a young person goes home and around the dinner table is telling mum and dad, ‘Gosh, this is my teacher and they said this to me, and my sports coach or performing-arts teacher said this’.

While MAGS may have no out-of-zoners in five years – except for 100 or so boarders and those studying in the agricultural science areas – the headmaster believes it is short-sighted for anyone, including ministry executives, to tell schools they should not accept so many students from “outside”.

One of the “fantastic things” about Mt Albert Grammar, he says, is the diversity of its student population – where 30 per cent are Maori and Pasifika and 55 per cent are Pakeha. The ratio hasn’t changed over the past 12 years.

“That is the richness and a huge reason why people want to come to this school. Gentrification of Mt Albert over the years could potentially put that diversity at risk in the future.”

Mr Drumm says the risk of “a cold hard zone” is that the school ends up reflecting just the immediate community – and “we want our young people graduating with a real understanding and ability to rub shoulders with different types of people”.

Unlike other countries, New Zealand has a “naturalness” about diversity, with people from different backgrounds, he says.

“I can take you to a class and show you a heterogeneous mix of people from all different parts of the world, and I think that is worth protecting. To do that, you’d hope the ministry and a Government which values diversity would allow some flexibility around zones, and allow schools to maintain that diversity – to satisfy that interest from West Auckland and South Auckland, and sons of old boys.”

“I think it would be a fantastic model for us if we had the ability in the ballot system to select to ensure diversity on the basis of a diverse and rich school community where we could look at certain groups and prioritise those. It would be a fantastic way of keeping, for all schools, that unified diversity and avoiding the dangers of becoming very isolated.”

To those who might suggest a school would prefer to opt for an out-of-zone rugby forward or talented orchestral musician rather than a “plodder”, the headmaster says “that would be a pretty cynical way of looking at it”, adding that the integrity of schools has to be trusted.

Mt Albert Grammar would prefer to have zero out-of-zoners if diversity could be protected, “but we feel an absolute obligation to those families who already have sons and daughters here rather than spread themselves across two or three schools. The board has made an ethical decision around that but obviously in the next four or five years, we will reach the point where there are no out-of zoners.”

Mr Drumm says the ministry has “an inability” to build capacity and plant at the rate that is needed. Although the school will next year get a “fantastic, state-of-art” science block, it will initially have 12 classrooms rather than the 16 really needed. “We have been waiting forever for it… It is a really exciting development but long overdue.”

The ministry, he says, “absolutely understands” that MAGS is one of the few schools whose roll is growing within zone, and accepts the need to provide more buildings. “But it is just such a slow process.”

Explaining the ministry’s position on the ability of Auckland’s central-west schools to cope with population growth, deputy secretary of education Katrina Casey says the medium to long-term education growth strategy for Auckland is being developed with the help of various agencies

“Auckland is going through unprecedented growth and it’s important that anything we do is coordinated and planned,” she says.

That work covers enrolment patterns and growth trends, including short-term roll forecasts based on retention rates, and long-term school-age-population projections out to 2043.

Secondary schools have large sites and good platforms for future roll-growth classrooms and at the moment  they take high numbers of out-of-zone students.

“The mid-west Auckland schools, therefore, have sufficient capacity to cater for future growth.”

Ms Casey says the ministry’s responsibility is to make best use of its resources and to direct the growth to schools that do have capacity.

Some secondary schools have high student numbers, she says, but across Auckland, rolls have been declining in recent years.

In general, the Auckland isthmus secondary schools have been doing “a very good job” of matching their rolls closely to their schools’ capacities, and top up with out-of-zone students. When demand for places at these schools increases in the future, they will have fewer places for students from out of zone.

Ms Casey says the ministry agrees that Mt Albert Grammar’s in-zone roll is growing and the school’s board of trustees is to be congratulated for moving quickly to reduce its out-of-zone student numbers.

“We are confident that the school is doing all it can to prevent overcrowding and there is no immediate need to review the enrolment zone.”

MAGS looks to cut the Unitec land from  its zone