Opinion: the value of heritage

Does a pile of old stones really matter? Is it worth wasting time in 2018 on some rambling structure put together 150 years ago that has slowly deteriorated over the decades?

Well, it depends on what side of the stone wall you’re sitting, though it might help to pop into Alberton House for an insight into what heritage really means. 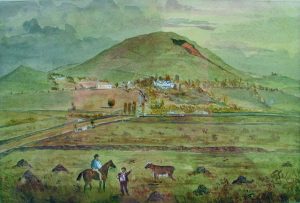 There you’ll find a painting (pictured), an original watercolour, showing a view of Alberton and the Mt Albert peak from the east with a farmer on horseback in the foreground. Just ahead of him is a line of stone walls, built from the loose basalt rocks that littered the land then and still sit beneath the surface on most Mt Albert properties.

Today, of course, that stretch of land is supercity residential, though the Mt Albert Grammar School farm and grounds give green relief in 2018.

The stone walls? Most of them are long gone – the price of progress and decay.

No loss, some people might think, even if such indifference seems odd alongside our fascination with the expensive stone walls built in the past 20 years.

But segments of old walls built in the 19th century remain in Mt Albert and the law protects them. The Heritage New Zealand Pouhere Taonga Act of 2014 covers all archaeological sites dating before 1900, whether they are recorded or not. No one can simply bowl over a structure that’s been around 150-odd years just because they think it’s had its day or is a nuisance.

Which brings us to a classic row in Mt Albert between those who care about our heritage and a developer.

At the centre of the squabble is a stretch of one of the old Alberton farm walls built in the early days of Allan Kerr Taylor’s influence – probably around 1870, but perhaps even earlier. 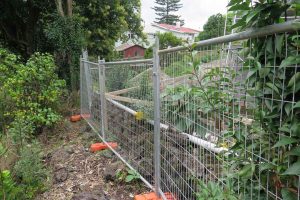 The wall runs from the edge of Meola Creek at Alberton Ave, along part of the northern boundary of the Roy Clements Treeway, and then extends about 40m up the rise.

The first 30m or so are very sound, and new: a concrete-capped stone wall that offered a pragmatic solution next to the creek but which may have been erected without concern for the rules.

The rest has seen better days, but don’t blame the ravages of time entirely for that.

Even before a developer got the right to build nine units off Taylors Rd in a project called Alberton Lane, the wall was in a sorry state. However, the new development, on challenging land, runs right to the edge of the wall and has caused further damage to the protected column of old stones.

The St Lukes Environmental Protection Society (STEPS), the guardians of the treeway, have been keeping an eye on things and, alarmed at what they saw as a lack of regard for the wall by workmen on the building site, called in Heritage New Zealand, Auckland Council and the Albert-Eden Local Board.

An on-site meeting last August with all the parties and the developer went through the issues. There seemed to be an acknowledgement that the section of the wall beside the development hadn’t been in a great state before the project began, and that it had been further damaged and undermined by workmen.

Heritage NZ apparently laid down the law in a quiet way, requiring the developer to repair the mess and cause no further damage.

That was almost six months ago. Now, a pipe structure sits with site rubbish along the crumbling wall, which continues to crumble. To add insult to injury, the developer has placed a high, free-standing iron mesh fence along the boundary – on the treeway side of the wall.

As a STEPS’ associate notes: “There is no question that the developers dumped rubbish on top of and on both sides of the wall. Nor that they pushed out and damaged various portions of the wall, causing rocks to fall and block access on the school side. Previously, the wall appeared intact. Now it is sprawling in places.

“We are very disappointed that their site plan did not prevent further encroachment by contractors who showed careless disregard for their neighbours’ community property. It is hard to believe that six months later, we have had a repeat offence.”

Responding to STEPS’ concerns, Heritage NZ Auckland area manager Bev Parslow says she has contacted the developer and “is working productively toward a resolution of these matters”.

Her view is that the agency’s demands have “for the most part been met by the developer and we are working productively with them to resolve any outstanding issues”.

These “issues” relate to ensuring that the remnant wall is not “impacted upon” by construction debris or future site works, she says, and “further actions toward ongoing maintenance and management of the remnant wall are also in train”.

The word is that the developer (who has not responded to Mt Albert Inc requests for comment) will tidy things up and then build a new fence alongside on his own property. Certainly, no one could blame him for choosing that option over the expensive business of employing experts to restore the wall to its former glory.

But developers and their contractors should not be a law unto themselves – acting, slowly, when prodded and only pullng on their good-corporate-citizen hard-hats when it suits.

No matter what people think about crumbling old stone walls, there’s little point in having legislation protecting heritage sites and landmarks if it can be treated with relative disdain.