Councils get it in the neck for lots of things they do (or don’t do) and the criticism can be harsh and unfair. But you’ve got to scratch your head at times… such as when peering up at the big liquidambar in Alexis Ave.

It’s been given the title of “Mt Albert’s doughnut tree” and is a giant monument to how councils can sometimes mess things up or let problems fester.

Liquidambars grow fast and tall – 25m-plus at maturity – yet some bright spark planted this one beneath power lines.

Rather than cut it down before it became a problem, the council let it grow, and over time contractors have periodically carved out the heart of the upper growth to allow the electricity wires to pass through. 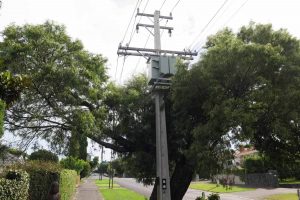 It seems a creative solution and may even work as a one-off piece of street art to create a curiosity. But look a bit further along Alexis Ave and down other Mt Albert streets such as Kitenui Ave, for example, and you’ll see plenty of examples of berm trees threatening power lines where the outcome isn’t quite so aesthetically pleasing.

The results (as shown here): perfectly good trees that have to be butchered by contractors so they don’t interfere with the overhead wires.

Why, then, did the council plant trees that are too big for their environment – and how much does it cost ratepayers each year to maintain the ugly outcome?

Mt Albert Inc put those questions to the council. The head of operational management and maintenance, Agnes McCormack, responded: “The practice of reducing trees from overhead services is necessary for safety reasons. Unfortunately, this can affect the natural shape of some trees. 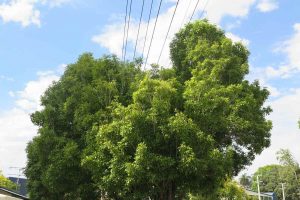 “Auckland Council tree management practices revolve around maintaining trees in as natural a shape as possible, but acknowledge that pruning work is required to maintain suitable clearances from footpaths, roadsides and any overhead services.”

“There are examples across the Auckland region where it could be suggested that the historic tree selection may not have been appropriate for the situation, such as the singular specimen of a liquidambar in Alexis Ave among an otherwise much smaller variety of tree.”

Ms McCormack says there were “various factors affecting these selections, including inheriting trees as a result of private tree planting (as was the case in Alexis Ave)”.

Which doesn’t quite explain why the liquidambar – hardly in the top tier of valued species – wasn’t chopped down when the council became aware of it and before it became an annual exercise for chainsaw contractors. 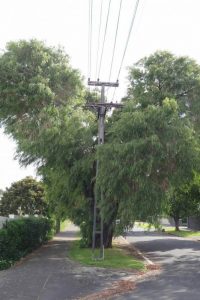 But the real problem, it seems, is at the utility network end where Vector was once working on a 20-year programme to put services underground, as they are in new subdivisions.

Ms McCormack says Vector abandoned that scheme after five years – but by then many trees were already in place. Hence the arboreal butchery in parts of Mt Albert designed to protect the Vector lines that by now should be underground.

A bit surprisingly, the council doesn’t have a specific policy around tree planting under power lines.

But a restructure in November 2016 created a specialist team to deliver “arboriculture and ecological restoration”, so a common-sense approach should now be with us.

As Ms McCormack notes: “We have initially adopted a best approach to planting trees beneath power lines to ensure appropriate selections are made that factor in the ease of maintenance and the impact of maintenance to the natural shape and form of trees. In many instances this does involve using smaller tree types.”

Which is gratifying, though won’t change the hacked-about shape of many Mt Albert trees any time soon.

The cost of keeping big trees away from power lines? Heaps, you’d think, but the council is not telling. The annual contracted budget for utility line maintenance work is deemed commercially sensitive.