Sir Harold Marshall is one of Mt Albert’s most distinguished citizens. He is Mt Albert through and through and lives on land that was once part of his his great grandfather’s farm. Sir Harold, co-chair of the Mt Albert Residents’ Association (MARA), has closely followed the planned Unitec development and was a powerful local voice during the Unitary Plan hearings. He hopes for an outstanding urban development, but worries about the social needs of a site that will carry up to 60 per cent social and low-cost housing – and whether they will be met.

OPINION: Most mornings as I ride on my exercycle I watch television. UKTV is the station of choice  and The Bill is a favourite.

As often as not there is a scene in The Bill in which the police seek a criminal in a four-storey walk-up social housing block known as “Sunhill”. Access is via external balconies running the length of the cheerless units behind their locked doors.  There is a pervading sense of hopelessness. Crime is everywhere.

This gloomy picture is the fear that no one is willing to confront in the Unitec development, though talk of a “slum” captures some of the angst.

Nobody wants that outcome. Rather, as I wrote earlier, “MARA’s concern is that this must be a beautifully conceived and designed new town development. There MARA is on the same page as the Government and the city.”

That’s the aspiration. There has been no lack of comment in the various media. Bloggers on the right such as Hooton, and Hosking are predictably negative, even comparing the density to the poverty and slums of Mumbai.

Discounting these there are more useful and thoughtful articles – even overlooking the somewhat censorious tone of some of them. “Yes, and you need to get over it regardless” was the quote from Mathew Prasad’s piece in The Spinoff (and reproduced on Mt Albert Inc) and is symptomatic of someone who claims to be the originator of the original master plan.

But what is more disturbing is the deception of the “visual” of the developed campus. A glance at the satellite view in comparison with Harrison Grierson’s wide-open green spaces fudges the issues around 4000 dwellings on this site. 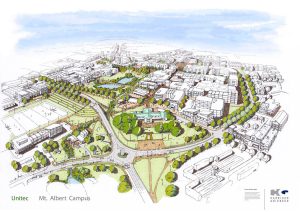 The only thing honest about this picture (shown here) is the congestion of the tertiary education remnant behind what is today Building 48 (centre).  The green open spaces and playing fields are a fiction in the context of 4000 dwellings and the resolute refusal of the city during the Unitary Plan independent hearings panel process, to include more parks because of the costs of maintenance.

A more interesting and thought-provoking  comment on Housing Minister Phil Twyford’s announcement was on the RNZ Insight programme on April 8, after the minister had outlined the Government proposal for 40 per cent “affordable”, 20 per cent social housing and 40 per cent “market” housing. The programme dealt with the housing needs of Maori and Pasifika people.

Talking about social (or state) housing from an urban Maori perspective, Hurimoana Dennis, chair of the Te Puea Marae in Mangere Bridge, noted that providing the bricks and mortar was the easy part. It was the “software” – the support – that was more difficult. 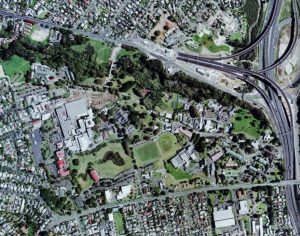 While 10 families may be put into 10 lovely homes, the question was: how long are they going to last and what do they bring to the neighbourhood?

“That’s something that’s missing,” he said on the radio programme. “It’s all been focused on bricks and mortar – the good sell, opening doors and cutting ribbons… that sort of stuff.”

Not a lot of thought was going into the “character and dynamics” of the whanau entering those homes.

A lot of those families had complex needs, he said, and the upshot was that those tenancies could become unmanageable in months because “dad has a drinking problem, mum’s gambling and the kids are going off the Richter scale”.

The result: warnings, eviction and homelessness.

Mr Dennis, whose marae houses families in 25 cabins while they wait for a permanent home, said that until the bricks and mortar were balanced with the right support it would be difficult to achieve much.

Not all state tenants are Maori or Pasifika, of course, though a high proportion are, and Huri Dennis was recounting his experience of perhaps the most disadvantaged group in the country – deprivation few of us can even imagine.

But with the plan for the Unitec block now to hold (on the basis of a 4000-unit development) 1600 “affordable” KiwiBuild houses and 800 state units, there is little doubt that social support will be needed – right from the start. It must be embedded in the fabric of this development.

As an illustration, nearby, also in Mt Albert, the Atawhai Lane social housing development of about five years ago – even with the support of the St Luke’s church community, and the Mt Albert Methodist church – soon needed the establishment of the Beneficiary’s Advisory service..

In the nine years of the previous Government accessing the support of Housing NZ – especially for people with limited English – this service proved invaluable in dealing with a confrontational bureaucracy. In the words of the Housing NZ  Board chairman, Patrick Snedden: “The Government remains focused on improving the effectiveness and efficiency of social services provided to New Zealanders, particularly vulnerable citizens. It expects stronger performance from government agencies and is seeking new ways to do more with less, within a restricted funding environment.”

I leave you to translate that but certainly it has nothing to do with compassion.  One hopes the new regime will be proactive in this new housing venture and embed the helping agency where it is needed.

In addition to the possible 800 social housing dwellings, let us not overlook the 1600 low-cost KiwiBuild dwellings we can expect to be occupied by first-home buyers.

This provision of support is the “software” Mr Dennis referred to, and he had some interesting responses to these questions I put to him:

“While there is a current shortfall of available warm and safe homes, they would need to be placed where community facilities and utilities can be accessed and close to support services, whanau, and networks. This will offset a whole lot of other expenses and needs for whanau moving into the new homes.

“In the context of today, availability of good land that fits the above plus more is hard to come by. Clever town planners and architects will be right across this and designing purpose-built facilities that can alleviate some concern around safety, environment, presence, access, and cultural/manawhenua sustainability and relationships.

“The people who occupy the homes? This has always been a concern for us here at the marae, which is the bulk of our mahi and effort as many come with a wide range of issues, many of which have contributed to their current homeless situation.

“That being said, it would not be helpful to believe that, while they may be homeless, it does not mean they are bad people or looking to cause more issues. Some have ended up in their situation simply because of forces outside their control.

“In any case, they are all good people and we treat them all in a manner that is consistent with the tikanga of the marae and our Tupuna, Princess Te Puea Herangi. She is our inspiration and many other old people of this whare who have since passed on. They just got on and helped people, didn’t matter what color they were or where they were from – manaaki tangata was always on hand.

“This could look like a cup of tea and cake, a growling from the old people, a warm blanket or just a smile.

“Whatever the leadership of our country decides, [we need] a comprehensive strategy that has two parts: bricks and mortar and social service provision and mindset.

“Change needs to be front and centre. Otherwise we will just be re-cycling people in and out of the system, which commences the generational issues and welfare dependency.

“… There is an extensive triage system that takes place before whanau move into homes and, in our case, ongoing follow-up while they are in the home. Our model requires us to work very closely with agencies and we do, they are co-located here at the marae and we have very strong relationships (trust/confidence) and partnerships (business) with them. We are very proud of this and know we can’t do it on our own.”

Beyond all these questions is the form of the settlements – and many more questions. Can the “perimeter block” advocated by Dr Morten Gjerde (as outlined in the Newsroom article and reproduced by Mt Albert Inc) play a part in promoting a sense of community? And what of protection for the dead-end streets that I advocated for in the Unitary Plan hearings?

Where I live – on a remnant of my great grandfather’s farm – I‘m a near-neighbour to the issues I have been discussing.

I can remember these streets – Fairleigh and Springleigh – unsealed and before there was curbing and channelling. I remember when the state houses were built in Renton, Rhodes and Laurel streets. Progressively these have become privately owned and now in a rush of market madness have a median value of about a million dollars.

The effect of introducing a further 4000 dwellings will inevitably distort the fabric of the suburb – a fact recognised by the Unitary Plan independent hearings panel in its insistence on an integrated traffic assessment before any development or subdivision.

But as Mr. Dennis says, the hardware is the easy part of the Government’s initiative. The difficult part is the “software” provision for the social needs of both the newcomers to this showcase housing settlement and the surrounding community.

These are the questions which must be answered now if the “Sunhill” experience is to be avoided here.

Mt Albert residents have shown in the past that they are ethnically diverse and want the best outcomes for their suburb.

Mr Twyford needs to encourage the planners and iwi to liaise with our groups as we address all the questions.

Dr Morten Gjerde and his perspective