Highs and lows of morning peak

In a right-hand-turn only lane and want to go straight ahead? No problem, swing left and away you go. Never mind everyone else. The pictures here show some of the illegal manoeuvrings at Mt Albert village in today’s morning peak flow – and, at the bottom, the long queue in one lane along Carrington Rd.

Right, now we’ve got rid of those damned orange cones, the village has passed its appearance test. It just looks and feels better. But what about the traffic test to really get everyone snarling if it tripped: the challenge of the first peak commuter run?

It’s easy to say the jury is out until the week is over and the impact of the late afternoon peak in the other direction is felt. But you’ve got to go with your hunches.

Everyone should know by now that this is a project for a future when trains, light rail, buses and cycles (and shared no-driver cars and congestion taxes, for that matter) have eaten into the influence of the commuter car generally carrying just the driver. 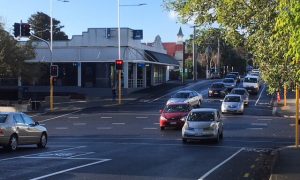 But it’s the transition that’s the problem. The long transition. No one wants to be dead before our traffic flows are acceptable.

So how did it go – was it a pass mark for this morning’s first peak-hour test of the new layout?

That would be stretching things and some major problems are emerging, but local (and passing through) minds need to remember how choked it all was before the upgrade project began in April last year.

Unless you start from that position – and factor in the thousands of new cars to have arrived since the summer of 2017, and the cycle lanes and widened footpaths that have taken away a lane or two and brought reconfigured turns – you’re on a hiding to nothing from people who expect miracles within a 125-year-old town planning canvas.

First things first – the pedestrians, mainly school kids, who are often the forgotten segment in a car-centric city. The Barnes Dance approach at the lights (Wikipedia calls it an “exclusive  pedestrian interval”) is great. It may not be seen as such when a single pedestrian halts traffic from all corners, but it works brilliantly in getting plenty of people where they want to go in one movement. Diagonal crossing? Too right.

Next, the exit of the slip road by ANZ. There was a lot of wailing over this, but an arrowed left turn on one phase and a clear left-turn on the through phase heading west works perfectly well. No one is inconvenienced and it’s much safer. Just a pity the pocket-park in its place isn’t quite as appealing as it might have been. 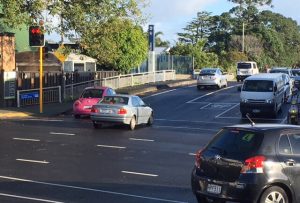 A traffic count on the actual flows from 7.50am to 8.30am today was interesting. For city-bound traffic on New North Rd, the early concern had been that eliminating the right-hand-turn-only lane would hold up the flow.

But that right lane worked well, with very few cars turning into Mt Albert Rd – and most of them doing it on the arrow. Just 11 cars turned into Mt Albert Rd in those 40 minutes as 615 other vehicles streamed through the intersection towards the city, with the odd one swinging left to Carrington Rd.

Is that city-bound clog worse now than it was a year ago? Perhaps but, apart from the right-hand turn issue, which is not a major, the reshaped village can’t really be blamed. It’s a clearway zone leading up to the lights and two straight-through lanes continue to handle the load.

Introducing cycle lanes in Mt Albert Rd has reduced the two lanes to one – and that is producing vast queues, back to Kitenui Ave in one direction and Woodward Rd in the other, with very limited traffic in either right-hand-turn lane.

At 7.50am today, the queues were only back to Prospero Tce on the western side of the overbridge and short of Allendale Rd in Mt Albert Rd. But as the morning progressed, the queues built, and extended to 30 and 40 vehicles biding their time in the through lanes as the right-hand lanes lay virtually vacant.

It doesn’t help that drivers can’t get into that right-hand lane until just before the bridge (when one lane turns into two). That means vehicles 200m or so back have to wait several phases – perhaps 10 minutes or more – before they can enter that empty right-hand lane. Very frustrating. 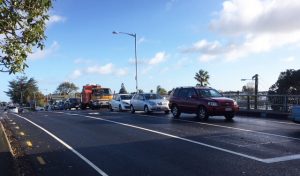 Of course, Auckland drivers being what they are – and with no temporary signs to warn of a change in configuration – the temptation to use an empty right-hand-only lane to go straight ahead was too inviting, even for one bus driver. Cue squealing brakes and barping horns.

With the odd exception, traffic up from Unitec tended to follow the rules, but most phases for vehicles flowing from Mt Albert Rd produced examples of people thumbing their noses at the law and forcing fellow motorists to take evasive action. No one can blame Auckland Transport for the selfish idiots. [Update: As I waited in Carrington Rd at 3.30pm, fours cars in succession came through the lights from the right-hand lane.]

Generally, only eight to 12 vehicles per lighting phase managed to pass through the intersection travelling over the railway bridge along Carrington Rd. In the 40 minutes, 204 vehicles got through the lights from that direction, 124 of them travelling straight ahead into Mt Albert Rd. A total of 54 turned left and 26 turned right.

There’s no doubt Auckland Transport needs to fine tune its light phasing, and they will be working on that now.

But it will take more than tinkering with the phasing to sort out the east-west flows. If it’s a headache now for their engineers they may need more than paracetamol to cure the ills by the time the Unitec project cranks up.

First step may be to accept defeat and take away those cycle lanes at the start of Mt Albert Rd, knock out a couple of parking spaces on both sides of the road and reintroduce two straight-through lanes heading east.

The cycling lobby and its cheer leaders within AT will hate going back to what we had, but if they want to side-step open revolt it may be better to bite the bullet.

At this morning’s traffic count, just four cyclists passed through the intersection. While their numbers are growing – and will continue to grow over time – chipping away a little now at their influence may be unavoidable.

It’s not perfection but it’s OK