It’s not perfection but it’s OK

OPINION: It can be hard to love Auckland Transport, and anyone working there needs very thick skin.

Like any big organisation, they’ve done some dumb things, and they can be quietly persistent in their belief that their way is the only way.

But in the end, pesky communities have to go with them – like it or lump it, or nothing would ever get done.

There can hardly have been a day since April 17 last year – when the physical work on the village upgrade started – that the good citizens of Mt Albert have spared AT’s experts from their sharp jabs. 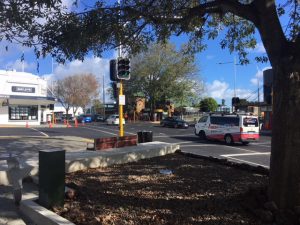 Well, that’s how it seemed on the community Facebook page. But when you looked at it closely, about the only issue on which the community spoke with one voice was its regard and concern for the village businesses. They suffered enormously and now deserve some time in the sun.

A lot of people seemed to forget just how awful the village was up to a year or so ago – seedy, neglected and shabby, despite the arrival of some smart new operators. Something had to be done and, after years of advocacy, the local board finally got it moving.

Of course, it was a nuisance they couldn’t have bowled it all over and started from scratch. But $5m or $6m only goes so far and there’s nothing easy about managing an urban project within a living community.

The cynical would say that we now have a seedy, neglected and shabby bunch of business premises sitting within a prettier infrastructure. There may be some truth in that, at the moment anyway. But you can’t create a smarter, stylish and more interesting shopping strip by waiting for a united force of landlords to lead the way.

Auckland Council, via the local board and Auckland Transport and its contractors, have created the environment for a more appealing town centre and it is now up to private capital to build on that base and add prosperity to the vision.

The problem is that most of us look no further than today, ignoring the fact that town planners and private enterprise will have their way in a burgeoning city. In 10 or 15 years, they see apartment blocks with shops beneath and café tables out on the wide pavements. Bring it on.

In that decade or so, perhaps around 2030 when the Unitec development is well over, Auckland will be a different city. It may seem preposterous to imagine, but the car may no longer be king. If it is, think shared self-drive, but also think cycles, buses, light rail and trains. A $15 flat white may occupy more minds than carparks.

While it’s time to stop blaming Auckland Transport for daring to mount a project that inevitably caused great upheaval, it’s interesting – on the eve of the official opening – to take a dispassionate look at how it’s turned out.

Bearing in mind a perfect 10 score was never possible because the contractors were restricted by the space they were given, it seems to be a fairly decent outcome.

The slip road has gone, and good riddance. But the pocket park is too slabby and gray to be immediately appealing (why on earth did they use stones rather than plants around the base of the tree?). Some decent street tiling and a bit more colour and imagination would also dilute the grayness.

The footpaths? They do seem a little wide – but why not? Taking 25cm off each side might offer a better sense of proportion. But that extra space would hardly create another lane for cars and in 10 or 15 years it may look just right.

Cycle lanes: Yeah, well, let’s see. I suspect it will all work out fine in the end, although the Mt Albert Rd western side cycle lane is a problem because it has forced the engineers to reject the logical path and make the outside lane up Carrington Rd from Unitec right-turn-only.

Pedestrian crossing and the car park by the tennis club – all good. Like the lights, seating and trees.

The traffic lanes: Standing at the Carrington Rd/New North Rd intersection for an hour this morning everything seemed to work pretty well (though rush hour may have been different).

In a perfect world, the right-hand-turn lane on the overbridge coming from Unitec would also be straight ahead, but traffic would have to veer left – and that would cause strife. As well, while the right-hand lane carries the lightest load by far, it is not a safe option to have two through lanes to Mt Albert Rd because the flows would have to merge into one lane there.

There is now just one pedestrian phase for all four crossings, which eliminates the frustrations of left-turning traffic from Carrington Rd having to wait – holding up vehicles travelling straight ahead – so that’s an advance.

In the other direction, from Mt Albert Rd, the outside lane is right-turn-only; the inside lane gives left turn and straight ahead options. The road markings here yesterday were still being worked on and there was a fair bit of honking when vehicles from two lanes tried to squeeze their way into the one lane across the overbridge. That confusion will go once better markings are in place, even if selfish Auckland drivers will always try their luck.

Coming from the city, the three lanes seemed to work well, although the inside lane (giving a left turn into Mt Albert Rd) posed problems for through traffic when they reached parked cars – and had to push their way into the one lane. This wouldn’t be a problem in the evening peak flow because the clearway means no cars should be parked there.

From the other direction – city-bound traffic on New North Rd – the only issue was with cars turning right into Mt Albert Rd. There weren’t many of them, and those with long memories will know that wasn’t a problem in the past because there was a short, dedicated right-hand-only lane.

So it’s not perfect by any stretch of the imagination. But once the fine-tuning is over and the computer-driven light-phasing machinery does its trick (all up and running from first thing Monday) it should be fine, though still with the peak flow bottlenecks we’ve had to live with for years.

We’ve just got to accept that perfection was never promised and was never possible – and keep telling ourselves: it’s a start… we had to do something.