Prime Minister Jacinda Ardern, with Mayor Phil Goff to her left, among the people at Mt Albert village today. Below: Snaps with the kids, and strolling with the mayor and local board chair Peter Haynes. Pictures: Bruce Morris

When you have a rock star on your patch, it’s great that everything goes smoothly. Well, nearly everything.

Jacinda Ardern came along today to mark the completion of the village upgrade, and the weather held off just long enough for her to do her thing and then mingle among hundreds of locals for selfies, autographs, laughs and chit-chat.

The village looked as much of a picture as possible with the raw material on offer. 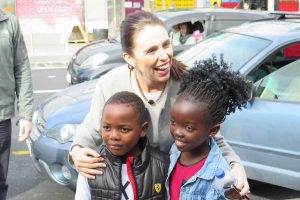 Like the upgrade itself, you wouldn’t say perfect – and a little downmarket on happenings in faraway Windsor. But it was a lively, happy celebration after a year of upheaval and at the end of it all everyone could say, “thank God that’s over.”

The cynics, presumably there for a close-up look at their Prime Minister and a free sausage roll rather than festivity, were muttering under their breath – and there was certainly some basis for the suggestion that things may have run a little late because the dignitaries were jammed in the traffic queues trying to reach the village.

The pro-upgrade brigade would have hated the sight as much as the doomsayers wallowed in their negative wisdom: queues in Carrington Rd at times back to Woodward Rd in one direction and Alexis Ave and New North Rd in the other.

It wasn’t a great look and will have had the traffic engineers wondering and worrying about the working week ahead. The chicken and the egg will be battling away for a few years yet as Aucklanders grapple with the dilemma of cars versus buses, trains and cycles.

Auckland Transport chair Lester Levy virtually conceded the project hadn’t been perfect, telling the audience he had instructed his CEO to find a model for future projects that could be completed quicker and with less upheaval. 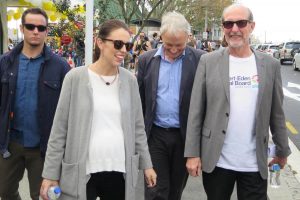 But Mayor Phil Goff, speaking earlier after a welcome by Ngati Whatua kaumatua, was having none of that, calling the $6m project a “fantastic” step to bring the village back to life and “recapture some of the things that the motorcar had taken over completely”.

He gave credit to the driving force of the local board and offered some positive signs that a town centre plaza on the site of the carpark next to Ray White might get his support once the leases expire in 2022.

But everyone was there for the MP for Mt Albert and she insisted on sharing the stage with “the people behind the scenes who do the hard graft for us all”, calling up members of the Albert Eden Local Board to join chair Peter Haynes and deputy chair Glenda Fryer, and Sir Harold Marshall of the Mt Albert Residents’ Association and Catherine Goodwin of the Mt Albert Business Association.

Ms Ardern acknowledged that business had suffered “a hard transformation… but now we are beginning to see the bones of the potential of rebuilding the Mt Albert town centre”.

“We can now take back the town centre for the people of Mt Albert and create a space we can all feel proud of – recreating that village environment again.

“Thank you for laying the foundation for us. We need to keep going – let’s keep reinvigorating this space because what sits around this town centre is the most wonderful community.”

And with that the rock star was off on the new widened footpath with her police entourage for a ceremonial planting, a round of selfies and a breeze through Albert’s Post… before tackling the challenge of the traffic queues on the way home.

It’s not perfect – but it’s OK