When will we go underground?

The answers to the questions of why “the authorities” would plant big trees beneath power lines and why Mt Albert streets can’t all have underground reticulation remain elusive.

Seeking straightforward answers when four agencies are involved has ended up in a convoluted version of pass-the-parcel.

Mt Albert Inc raised the issue last month, wondering why so many local trees have had to be butchered when they start growing into the lines above. Our position: Choose more suitable trees and spare ratepayers the maintenance cost. 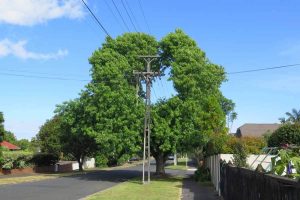 Auckland Council, which has responsibility for berms where the trees grow, agreed there was a problem in some areas and, among other things, blamed private people for planting big trees – like the “doughnut tree”, a big liquidambar in Alexis Ave.

But the council mostly pointed the finger at Vector for abandoning its 20-year programme to put services underground, as they are in new subdivisions.

The council argument went like this: we thought all suburbs would soon have underground reticulation, so bigger tree specimen were planted on verges in some areas. When Vector changed its mind, the trees were well established – and the chainsaw now is the only option.

A Facebook discussion followed, and the further question was asked: what happened to the Auckland Energy Consumer Trust (AECT) promise to systematically push power lines underground?

AECT (called Entrust since 2016) is the private trust that owns most of Vector, New Zealand’s largest distributor of electricity and gas. It has 320,000 beneficiaries in the old Auckland City Council area, Manukau, northern Papakura and eastern Franklin and gives an annual dividend to each of them.

So we went to Entrust, and chairman William Cairns told us the undergrounding initiative is still in place, though plainly selective and moving slowly.

He reported: “In regard to Mt Albert, a large-scale undergrounding project that included parts of Mt Albert Rd was completed in 2008/2009. It was on the border between Sandringham and Mt Albert and included parts of Sandringham Rd and approximately 20 side streets. The total investment was around $10m. Undergrounding has also taken place on Carrington Rd, and there have also been some additional small projects which have been partially resident funded.”

Mr Cairns says Vector manages the programme and selects project areas for each financial year, based on criteria such as: 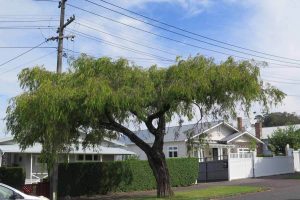 But … Vector also needs agreement from Chorus to underground its telephone lines at the same time “otherwise there is no visual benefit to residents as telephone poles and wires would remain in place after electricity lines are underground”.

And unfortunately, says Mr Cairns, “Chorus has advised they will be reducing their funding on these initiatives going forward, which may have an impact on undergrounding in the future. We are actively liaising with Chorus to identify project areas where undergrounding can occur.”

So off we then went to telecommunications provider Chorus, which told us through a spokesman that the problem is volcanic rock.

“The reason that utility networks were originally put up on poles was due in large part to the difficulty in trenching to lay cables,” he said.

Much of the ultra-fast-broadband network has been designed to allow fibre cables to be hung from the existing pole network – “and most of the properties in the streets in question have aerial (overhead) lead-in cables for telecommunications and power.  Undergrounding the cables in the street would require every homeowner to rewire the utility connection point on their house.

“Chorus does participate in shared undergrounding projects with Vector from time to time, where it makes commercial sense.”

Where does all that leave Mt Albert and the dozens of streets with ugly power poles and hacked-about trees? When will we go totally underground?

No idea, but don’t bet the house on great change any time soon.