With the village upgrade behind us – well, sort of – Mt Albert people face a future of more disruption to local streets as Auckland Transport begins to turn to the impact of the Unitec housing development and the ability of Carrington Rd to cope.

The Carrington Rd project, largely to create bus and cycle lanes and upgrade intersections, has been on the agenda for a year or two and was probably a central focus of the draft integrated traffic assessment (ITA) the Wairaka Land Company was preparing for AT.

The company, a subsidiary of Unitec, was working on the traffic assessment and the associated development masterplan pending the sale of land for housing.

But just as Wairaka began talking to private developers, along came the new coalition Government and grabbed 29ha of Unitec’s 53.5ha for a new housing estate to accommodate 3000 to 4000 dwellings. The deal was signed in February and settled in April, allowing Unitec to pay off debt. 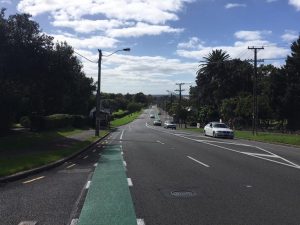 The change in direction means the creation of a new masterplan – laying out how the development will look – and ITA responsibilities are now in the hands of the Government and its partners. (The Unitary Plan requires developers to complete a comprehensive traffic assessment for every site to identify what transport infrastructure is needed and when and how it will be funded.)

To some extent, this means starting all over again. While the new owners will be able to build on the earlier Wairaka work, the Crown plan is for up to 4000 units on a block that Wairaka saw as holding 2675. The difference in traffic impact may be considerable.

Housing and transport minister Phil Twyford has been stressing the Unitec project will be a model for a future where cars are less important, and there will be great local interest when the ITA is revealed.

Auckland Transport will not sign off on a traffic assessment until it is satisfied the traffic flows around the development can be managed or mitigated, and that’s an obstacle the development must clear before subdivision work begins and consents are approved.

The developers will have to contribute to widened roads, re-shaped intersections, calming devices and other steps  considered  necessary to cope with the extra traffic – and the council could even limit the size of the development if experts believe choked local roads will be the result.

While there are worries culs-de-sac on the southern border of the Government-owned land may be turned into through roads, greatest focus will be on Carrington Rd and how it will cope.

Originally, Unitec agreed informally to hand over a slice of its Carrington Rd frontage to allow bus lanes and a small transport hub to be created, allowing the road to be widened from Pt Chev through to Woodward Rd..

But the land sale means it now holds only a portion of the frontage and the Crown will need to show the same willingness to shed some of its property as part of the overall plan. Discussions on that point will no doubt form a key part of the ITA negotiations.

With the Government eager to build momentum for its KiwiBuild programme, there will be political pressure on the council and its agencies to act swiftly.

Mr Twyford initially declared that building on the first subdivision would begin around April next year, and there’s been nothing since on that timing. But if the target is still on track, the masterplan will probably need to be in place and the ITA well advanced by the start of summer.

And the widening of Carrington Rd? Too early to say, but it could be an 18-month project and will need to be over before the bulk of those 4000 dwellings are finished by, say, 2025.

AT is yet to sit down with the Crown’s agents, but expects to do so “in the near future”.

The agency’s Theunis van Schalkwyk, group manager of strategic projects, wrote in response to a Mt Albert Inc official information request that funding is in place to allow a business case to be developed to upgrade Carrington Rd.

Mr van Schalkwyk added: “Once plans for the site are announced, we would expect an ITA to be prepared to inform what transport infrastructure is required (and when) to support the development. This will be key to inform further optioneering in a future Auckland Transport business case.”

After the village upgrade and traffic flow problems through the Carrington Rd/New North Rd/Mt Albert Rd intersection, AT isn’t exactly riding high in popularity polls, if Mt Albert social media is any guide.

More major local road works, no matter how important, will probably be regarded by most locals with misgivings, to put it mildly.

To them, widening Carrington Rd may seem almost straightforward when set against the challenge, in six or eight years, of funnelling a vastly-increased traffic flow over the railway bridge into New North Rd and Mt Albert Rd. How can that work?

This time around, you can guarantee the public consultation sessions will be very well attended indeed.

Opposition to Ngati Whatua’s sub-division plan without an ITA